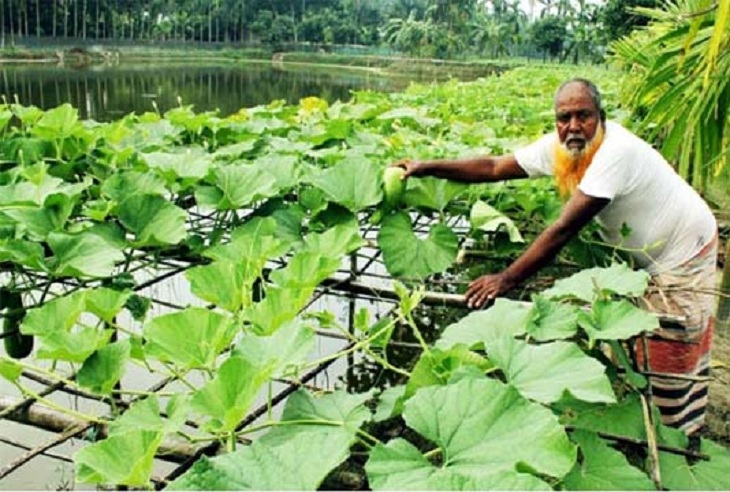 Farmer Abdul Hakim has attained laudable success in earning extra profits through intercropping of poison-free gourd along with dairy farm on his pond bank in village Khopati of Kawnia upazila in the district.

Hundreds of hybrid varieties ‘Diana’ gourds are hanging, ready for harvest now, from bamboo-made ‘Macha’ or ‘Jhangi’ (overhead fences) across the pond bank where he also cultivates fish simultaneously.

The 50-decimal pond with growing hybrid variety gourds has turned into a greenery widely introducing Hakim as an ideal poison-free vegetable farmer.

Hakim has also cultivated winter bean and other vegetables on the pond bank making best use of land to produce maximum quantity of crops.

Talking to BSS, farmer Abdul Hakim narrated his success story of gourd farming along with other vegetables round the year on the pond bank.

He has been cultivating vegetables adopting modern technologies with assistance of the Upazila Department of Agriculture Extension (DAE) and without using pesticides for a long time.

“I generally sow gourd seed in early April and gourds start becoming visible and hanging from overhead fences from mid-May when harvesting of crop begins and continue till November every year,” he said.

The full harvest begins from July and he already sold 3,500 gourds at Taka 52,500 on an average rate of Taka 15 per piece to middlemen.

However, middle-men sells their purchased gourds at Taka 20 to Taka 25 per piece to retailers in urban areas where those are being at rates between Taka 35 and Taka 40 per piece.

“I am expecting to sell more gourds to earn another Taka 25,000 by November when the harvest completes this season,” Hakim said adding that he sells 25 to 40 gourds a day on an average.

After completing harvest of gourds, Hakim will begin harvesting bean, cabbage, cauliflower, coriander leaf, brinjal and other vegetables cultivated on his pond bank and other adjoining 20 decimals of land from November to February.

“I will also cultivate ‘Sasha’ after completing harvest of gourds using same overhead fences without spraying chemical pesticides,” he said adding that cultivation of vegetables along with the dairy farm has now become a habit to him.

Being inspired by success achieved by Abdul Hakim, farmers and common people of other adjoining areas regularly visit his pond bank to see growing vegetables fields take advice for launching the venture.

Remembering his previous days, Hakim said, ‘There was a time when it was very difficult to run his family due to poverty even a decade ago.”

As per suggestion of his wife, he set up dairy farm on his pond bank and then started cultivating vegetables on overhead fences and also vegetables on other 20 decimals of his land.

“I am solvent now to lead solvent life with my family members,” Hakim said adding that he is encouraging other people in ensuring best use of their homesteads and other fallow lands to increase food productivity.

“We always try our best to assist farmers and advised them to solve their any problem quickly. Excessive seasonal rains cause damages to gourds and other standing vegetable crops. This loss cannot be recouped totally,” he said.

In case of vegetable cultivation, Alam stressed on the necessity to launch insurance system for cultivation of crops like vegetables and increasing the extent of providing training to farmers on modern
technologies.

China to cooperate in production of profitable crops: Razzaque