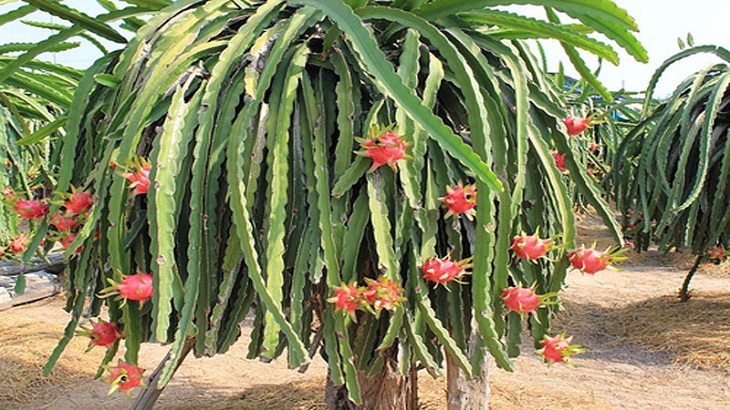 Farming prospect of dragon fruit, a delicious but non-conventional fruit in Bangladesh, is very bright as many of the farmers have become successful after farming this fruit in the region including its vast Barind tract.

Rafiqul Islam along with three of his friends first started to cultivate the fruit on experimental basis in Kendobona area under Nachole Upazila. After getting some profit, they became more interested in cultivating the profitable fruit on a large scale.

Rafiqul mentioned that the cultivation of the fruit is profitable and they are expecting good profit this year. He said the cultivation process is not only easy but also the required investment is very low.

Looks like cactus, each dragon tree lasts for 20-30 years and gives 20-25 fruits each season. Though the fruit is new in the country, there is a demand of the fruit among people, said Rafiqul.

He said they sell the fruit to local customers for Tk 300-400 per kilogram. Rafiqul’s friend and business partner Nur-e-Alam Siddiqi Babu said the demand of the fruit is increasing as it looks beautiful and the taste is also good.

Abdul Matin, another farmer of Gofanagar village under Mohadevpur upazila, has set an instance of becoming successful through dragon farming in the area.

After getting technical support from local horticulture centre, Abdul Matin started the farming on August 10, 2016. Already, he has started getting fruit for the last two years.

Now, there are 50 dragon plants in his orchard. Apart from, he has 65 malta and five orange trees, five lemon, seven papaya, two litchi and three coconut trees as intercropping.

On the vacant lands, he has been cultivating turmeric and arum to get additional profit.

Agriculturist Deb Dulal Dhali, Additional Director of the Department of Agriculture Extension, said the prospect of dragon is very much bright in them region including its vast Barind tract as it has started gaining popularity both at farmer and consumer level for its high commercial and nutritional values.

More than 125 demonstration plots of the cash crop were established in Rajshahi, Natore, Pabna and Bogra districts.

Dr Saifur Rahman, Deputy Director of Regional Horticulture Research Centre, said their centre has become success in cultivating dragon fruit. Soil and weather of the region is favourable for the fruit. Besides, the taste is very same as dragon fruits grown in other countries.

Narrating its salient features he said dragon fruit is suitable for everyone to eat. Flesh and seeds are edible parts and they are eaten altogether. It supplies fiber which is digestive and helpful for healthy liver. The rest portion of the fruit includes carbohydrates and water.

It is mildly sweet tasting and especially low in calories. The seeds are digested only if chewed. The flavonoids in dragon fruit lower the risk of heart disease and high blood pressure.

It also reduces oxidative stress and artery stiffness as found in animal studies and therefore is thought to prevent complications associated with diabetes. The high antioxidant levels lower the risk of many types of cancer.

Thai farmers race their buffaloes in show of gratitude