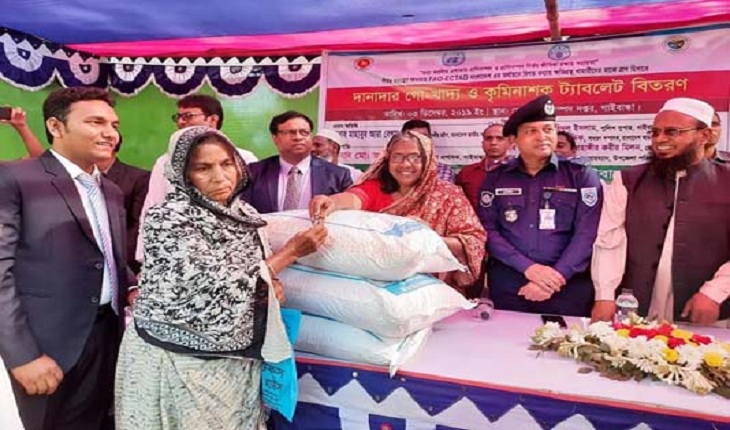 A total of 800 flood affected farmers  got concentrate feed and anthelmintic tablets for their cattle from the Livestock Department on Tuesday.

Whip of the Jatiya Sangshad Mahabub Ara Begum Gini distributed the tablets and feed among the farmers as the chief guest at a function, held at the district livestock office premises.

The chief guest in her speech said the government has taken up a plan to construct Mujib Kella in the district as elsewhere of the country on the bank of the rivers so that the flood victims along with their cattle and poultry birds could take shelter there during the flood.

She urged the farmers to rear cow, goat, sheep, chicken and duck at larger scale to the meet the demand of nutrition of the country and change their socio-economic condition.

The whip also asked the field level officers and the staff to be more serious and professional in providing the official services to the farmers so that they could rear the cattle and poultry birds in hygienic way without any disturbance.

Each of the farmers received 75 kgs of concentrate feed and 12 anthelmintic tablets for their cattle.

One held for raping physically challenged girl in Gaibandha

90 charged with attack on Santals in Gaibandha