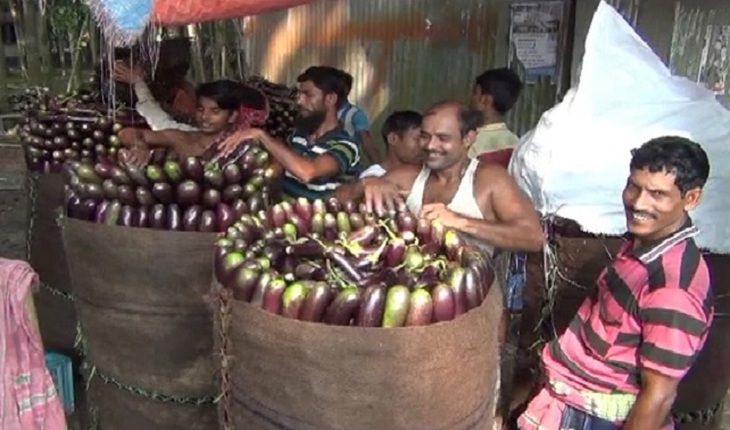 Farmers in Sadarpur upazila, known as the leading grower of vegetables in the district, are busy harvesting brinjals that are being sent to markets across the country.

The vegetable is fetching good prices and broadening the smiles to farmers’ faces.

According to the Department of Agriculture Extension (DAE), 486 hectares of land have been brought under brinjal cultivation, about 200 hectares more than the previous season. DAE officials say they expect a harvest of 11,178 metric tonnes.

Kartik Chandra Chakraborty, deputy director of Faridpur DAE, said they provide the farmers with advice and suggestions regularly. “We take immediate steps if the farmers face any problem,” he said.

During a recent visit to the upazila, the UNB correspondent found that brinjal farmers of Shouldubi, Math Shouldubi, Abuler intersection, Badhanoghat areas under Krishnapur union of Sadarpur upaizla are passing a busy time in the fields.

From dawn, farmers are engaged in harvesting, cleaning and packaging the brinjals. It is the common sight in the fields from early morning to noon. The quality of the product attracts wholesale vegetable traders from different areas.

Haris Mollah, a brinjal farmer from Shouldubi, said income from eggplant is several times higher than the production cost. “I’ve become solvent thanks to brinjal cultivation,” he said.

Wholesale buyer Habibur Rahman, who came from Dhaka, said the brinjals from the upazila are in high demand because of their quality. “That’s what brings vegetable traders here from far and wide,” he said.