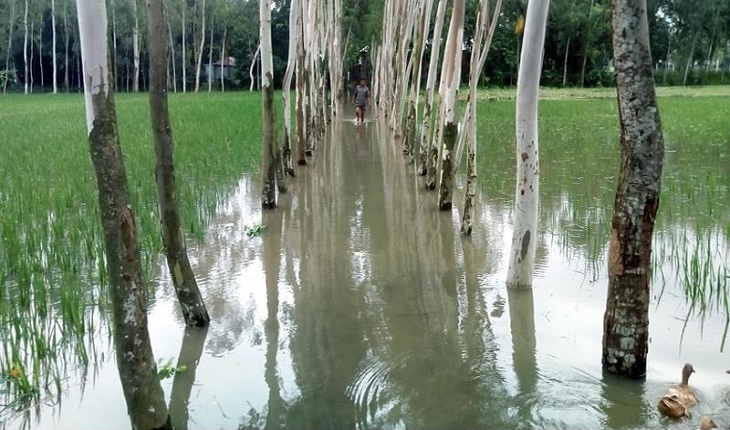 The Department of Agricultural Extension (DAE) continues damage assessment of submerged crops on 31,321 hectares of land due to flooding in four districts out of five in Rangpur agriculture region.

Talking to BSS, Additional Director of the DAE's Rangpur region Bidhu Bhusan Ray said there is no flood situation now as floodwater has already receded from submerged croplands in the low-lying areas of the region.

Field level officials of the DAE are assessing damage of inundated crops as a major portion of those would recover from stresses of submergence for three to four days while a little portion might be damaged due to inundation for a longer period.

"We are getting reports of very little crop damages from affected areas after the recession of floodwater from everywhere in the flood-hit four districts out of total five under the agriculture region," Ray said.

Meanwhile, the DAE officials have started suggesting flood-affected farmers for taking necessary steps to recoup the little crop losses they incurred during the recent short-term deluge.

"The standing crops, including Aman rice seedbeds, transplanted Aman rice and vegetables, submerged under floodwater in Rangpur, Gaibandha, Kurigram and Lalmonirhat districts with no submergence in Nilphamari of the region," he said.

Officials of all agriculture related departments, organisations and institutions and some NGOs are visiting the flood-affected areas and suggesting ways to farmers to tackle the situation.

The flood-affected farmers are being suggested for preparing late variety Aman rice seedbed anew at fewer places for transplantation of the seedlings and taking preparation for cultivation of substitute crops on the flood-affected croplands.

"The DAE will assist flood-hit farmers in recouping little crop losses they incurred during the recent flood through cultivating early varieties of 'Mashkalai', vegetables and other crops on their flood-hit croplands," Ray added.