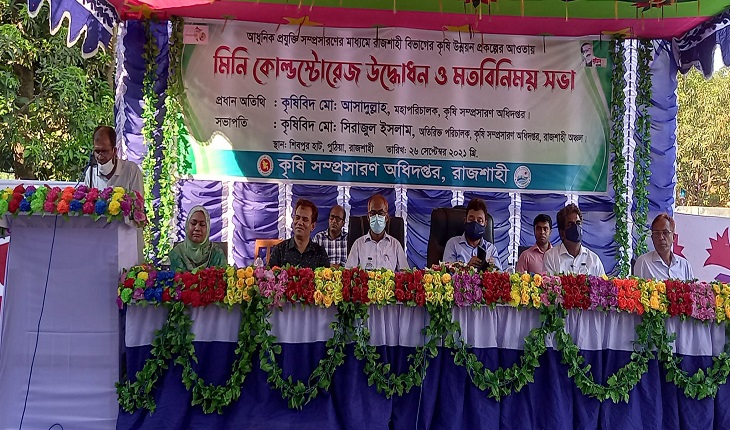 Experts have underscored the preservation of fruits and vegetables in cold storage to lessen at least fifty percent unexpected losses.

They said every year the farmers in general incurred huge financial loss as they can not preserve fruits and vegetables in the region due to lack of proper facilities.

The observation came at a view-sharing meeting on inaugurating a mini-cold storage with four-tonne capacity for preserving fruits and vegetables at Shibpur Hat under Puthiya Upazila in the district on Sunday afternoon.

DAE Director General Muhammad Asadullah addressed the function as the chief guest, while Additional Director Sirajul Islam was in the chair.

Director of the project Dr SM Hasanuzzaman welcomed the participants.

In his remarks, Muhammad Asadullah said Bangladesh is now a role model in fruits and vegetables production before the world.

The farmers will be benefited if they can get scopes of preserving fruits and vegetables.

He clarified that preservation time of fruits and vegetables can be enhanced by one month through controlling only the temperature.

"We have started setting up mini cold storage on pilot basis and we can enhance the number in future after assessing results of those," he added.

In addition to the Shibpur Hat cold storage, two other cold storages are being established at Natore Sadar Upazila and at Shibganj Upazila in Chapainawabganj district on pilot basis for the first time in the region.

The cold storages will help the farmers protect their mangoes and other perishable goods from being wasted for around one month.

Project Director Dr SM Hasanuzzaman told the meeting that construction works of two other storages are expected to be completed within the shortest possible time.

He said the five-year project is being implemented in 67 Upazilas of all eight districts in the division at a cost of around Taka 147.03 crore since
January, 2020.

Upon successful implementation by December, 2024, the project will help increase cropping intensity to 242 percent from 237 percent through expansion of modern agriculture technologies.

Besides, the project is intended to enhancing production of paddy, pulse and oilseed to 12 percent each, wheat and maize to 10 percent each, spice to 13 percent, vegetables to 15 percent and fruits to 14 percent.