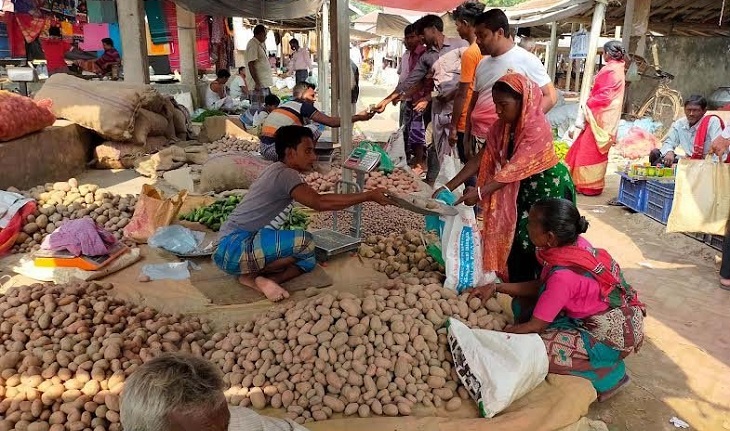 Around 33.42 lakh tonnes of potato are expected to be produced from 1.64 lakh hectares of land in all eight districts of the division during the current Rabi season.

Official data showed the target of producing 13.11 lakh tonnes of potato has been set from 61,590 hectares of land in four districts of Rajshahi Agricultural Zone, while 20.31 lakh tonnes from 1.03 lakh hectares in four other districts of Bogura zone.

Department of Agricultural Extension (DAE) has set the target and adopted all sorts of measures to attain the cherished goal, said Sirajul Islam, Additional Director of the DAE.

Meanwhile, some farmers have started harvesting and marketing early varieties of potato.

The newly harvested potatoes are appearing in the local wholesale and retail markers with sky-high prices.

"We are purchasing potatoes from retailers and vendors at Taka one hundred per kilogram at present," said Ambia Ferdousi Khanom, a housewife of Boaliapara in the city.

The farmers are getting lucrative market prices for their produces this season.

Altab Hossain, 54, a farmer of Mougachhi village under Mohanpur Upazila, is preparing to cultivate potatoes on around 170 bigha of land in Krishnapur area of Tanore Upazila. He has already leased his expected land.

"I had cultivated the cash crop on 110 bigha of land in the same area last season. I had harvested around 8,800 maunds of potato and my profit was around Taka one crore after selling those," said Hossain.

He's also very much hopeful about this year's farming.

Like the previous year, Ershad Mondal, another farmer of the same upazila, had taken preparation to bring around 100 bigha of land under potato farming.

He said the potato is being sold at around Taka 1,400 to 1,600 per mound, which is much higher than the previous years.

Many other farmers like Altab and Ershad are taking full-preparations to cultivate potato commercially. They have already completed the lease process of the lands much before harvesting the transplanted aman paddy.

Land preparation and seed sowing activities are likely to start in full-swing everywhere in the region on completion of harvesting aman paddy.

Mijanur Rahman, an operator of deep-tube-well in Krishnapur village, said the farmers are seen cultivating potatoes more instead of Boro paddy in the Barind area and the Tanore and Godagari Upazilas in particular.

He identically mentioned that the farmers are interested in potato farming as it's being adjudged as a less-irrigation consuming crop than the boro paddy.

Under the 'Integrated Water Resource Management (IWRM)' project, more than 12.58 lakh community people of 2.66 lakh households are also being motivated and encouraged for potato farming to reduce the pressure on underground water.

The project is being implemented by DASCOH Foundation at around 1,280 drought-hit villages in 39 Union Parishads and three municipalities of eight upazilas in Rajshahi, Naogaon and Chapainawabganj districts since 2015, said Jahangir Alam Khan, Coordinator of the project.

Simultaneously, commercial potato farming has been expanded to the dried lands in large during the last couple of years in the vast Barind tract as a result of promoting irrigation facilities by the Barind Multipurpose Development Authorities (BMDA).

Agriculturist Sirajul Islam said the field level officials, experts and other organisations concerned have been providing necessary instructions to the farmers to make their upcoming farming a total success.

Most of the growers' harvested better yields of potatoes in the last two to three years.

Last season, the farmers harvested more than 16.57 lakh tonnes of potato from around 76,661 hectares of land in the division, Islam added.

Concerted efforts for welfare of people with disabilities stressed