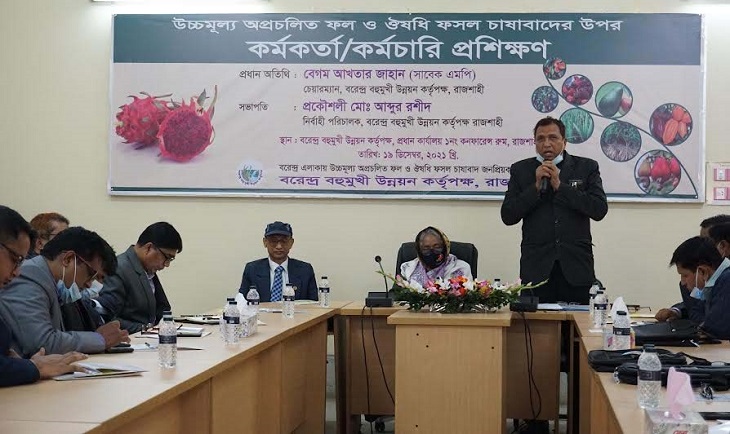 Motivating the grassroots farmers towards expanding and promoting non-conventional fruits and medicinal crops farming can be the best ways of meeting up the gradually mounting demands through boosting production.

Field-level agricultural officials and employees have a vital role to boost the fruits and medicinal crops farming through motivating and encouraging the farmers.

Importance of various non-conventional fruits and medicinal crops is very significant in terms of protecting the public health from various communicable diseases including Covid-19.

Agricultural extension and researchers came up with the observations while conducting technical sessions of a daylong training for officers and employees on the issue in Rajshahi city on Sunday.

Barind Multipurpose Development Authority (BMDA) hosted the training at its conference hall under a project titled "Popularizing of High Valued Unconventional Fruit and Medicinal Crop in the Barind Area".

BMDA, the ever-largest irrigation providing state-owned entity in the country's northwest region, has been implementing the project since early this year.

The five-year project is being implemented in 13 upazilas of Rajshahi, Chapainawabganj and Naogaon districts at a cost of around Taka 17.34 crore.

ATM Rafiqul Islam, director of the project, gave an illustration of the project along with its aims, objectives and implementation strategy during his keynote presentation.

He said around 52 demonstration orchards will be generated aimed at boosting production of high-valued non-conventional fruits and medicinal crops through popularizing farming of those in the Barind area.

Besides, initiative has been taken to generate more orchards of the highly valued fruits and field crops in personal lands and homesteads of the farmers in the dried area.

To this end, 4.15 lakh saplings and 2,000 kilograms of seeds of nonconventional fruits and crops will be distributed among the farmers free of cost on behalf of the project.

Some 1,500 farmers and 310 officers and employees concerned will be imparted training on production, transplantation, nurturing and other techniques of the seedlings.

Rafiqul Islam said the project is being implemented with the main focus of boosting commercial farming of the high-valued fruits in the project-covering areas.

As a whole, the project is intended to inspire the farmers to high valued fruits farming commercially.

"We've set the target of establishing 22 orchards for fruits, 20 for field crops, eight for spices and two for beverages," he said, adding that most of the highly valued nonconventional fruits, field crops, spices and herbs will be brought under demonstration.

Upon successful implementation by June, 2025, the project is expected to contribute a lot to enhance the number of orchards of nonconventional fruits and medicinal crops.

715 more ponds to be re-excavated in Rajshahi region