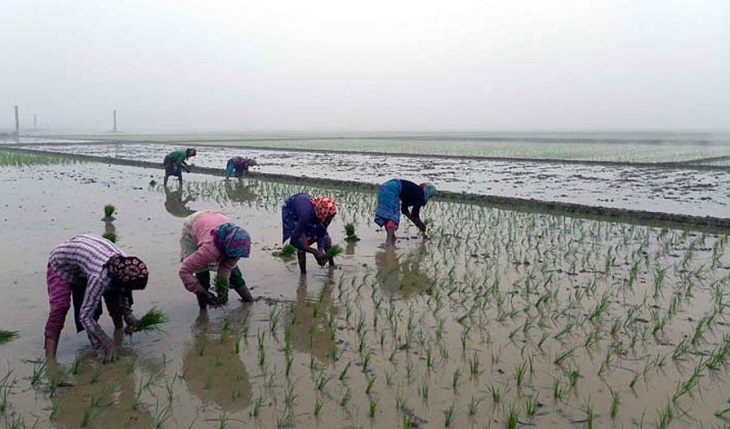 Around 35.52 lakh tonnes of Irri-Boro rice are expected to be produced from 8.12 lakh hectares of land in all districts of the division during the current season, officials said.

Meanwhile, the farmers are passing their times by nursing and caring for the seedbeds of the paddy, braving the winter chill and fog at present.

Sirajul Islam, Additional Director of DAE, said all the district, upazila and field level officials and others concerned are giving suggestions to the farmers to protect their seedbeds from cold covering their seedbeds with polythene in night.

Abul Kashem, a farmer of Mayamari village under Niamatpur upazila, said he has prepared seedbeds on 25 decimals of land for cultivating paddy on 18 bigha of land this season.

He is now very much hopeful of starting the transplantation of seedlings within the next one month.

Kashem has adopted some preventive measures to protect the seedbeds from any cold related diseases.

Mahbubur Rahman, another farmer of Chanpara village, said he is anxious over the sweeping cold weather.

He along with many of his fellow farmers is passing busy days to protect the seedbeds from cold injuries.

The adverse climate condition is also a little-bit detrimental to the seedbeds, but there is no apprehension of any major damage to it, he said.

Dr Islam said the field level agriculture officials, researchers and scientists are reaching the developed varieties to the farmers' doorsteps so that they can boost the Boro paddy yield after the best uses of the varieties.

The conventional varieties are being replaced by modern varieties which are good signs for the region in terms of boosting yield, he said.

He said there is no way but to enhance rice production through facing the existing challenges of adverse impact of climate change with gradually declining resources and agriculture manpower.

Concerted efforts for welfare of people with disabilities stressed