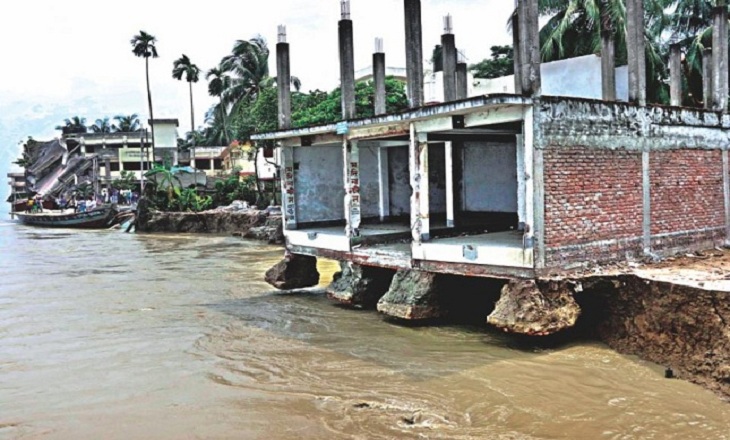 Some 5081 families have been rendered homeless in Naria Upazila due to the violent erosion of Padma River in the district in recent weeks.

“We don’t want help, we want the embankment, people could make their livelihood by driving rickshaw or three wheeler if there was an embankment here,” said mother of two Mahamuda Begum, who has already been displaced four times previously due to river erosion.

Another victim of Padma erosion Azizul Madbar said “My house was 5 km away, this is the fourth time, I have brought down my house and rebuilt for river erosion, I have become depleted. Our rescue is only possible if Prime Minister looks upon us. Otherwise there is no one to save us.”

Juwel Bepari of the same area said he and his family were passing their days only half-a-kilometre away from the point at which the river is now, renting a place for Tk 6,000.

Meanwhile Monir Bepari said his family has taken shelter one kilometre away at a relative’s house, having sold a house they had spent Tk 15 lakh to build for just Tk 17,000.

Sufia Begum of Kedarpur village in the upazila had a large house and owned a shop at the historic but fast-disappearing Mulfatganj bazar, both of which were engulfed by the Padma.

“Within two months our wealthy condition turned into poverty,” she said.

The people affected in the region have become listless. With no rehabilitation program on the ground they are living under the open sky with no roof above them.

Though no significant damage was reported on Thursday, people of the river banks were passing their days in great fear. Around 200 houses were shifted – houses here tend to be the makeshift bamboo-and-tin type, keeping in mind the danger - from Banstala area of Naria upazila by the afternoon out of fear of the erosion approaching their area.

Affected people said no one from the government haa inquired about them, nor taken any steps for their shelter. The political leaders come to them “only during the election”.

They don’t want food or money but want only a shed above their head and an embankment, they said.

Within one week different government and private buildings of Mulfatganj Bazar were vandalised. Earlier on Monday night, most of the parts of the new building of Naria Upazila Health Complex went under the Padma water.

Emergency and Exterior departments of the hospital were operating in a residential building of the hospital campus but its main entrance was lost creating disruption in service.

No patients were seen taking treatment there due the erosion fear. Eleven more buildings of the hospital complex were under erosion threat while a crack has occurred in one building, witnesses said.

Naria Upazila Nirbahi Officer Sanzila Yasmin said according to the government reports a total of 5081 families has been left without shelter for the erosion in Padma.

“Spending 5 crore taka, a total of 1,10,000 sacks of Geo bags have been placed on the river banks to prevent the erosion. This has had a small effect,” she said.

“Though the prevention of river erosion was not possible in this moment but we were trying to reduce the intensity of the current by putting Geo bags. The project will start after the water decreases,” he said.