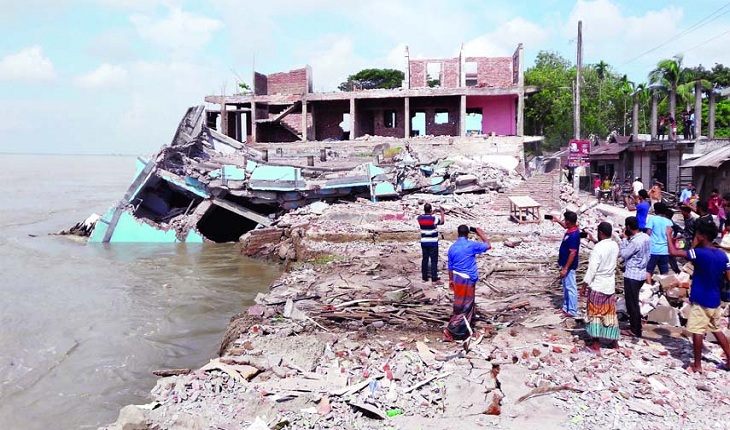 European Union is providing EUR 80 000 (Tk7.84 million) in humanitarian aid funding to address the needs of the most vulnerable families in response to the collapse of the Padma River embankment in Shariatpur distirct.

The assistance will directly benefit a total of 15 000 people.

This EU funding supports the Bangladesh Red Crescent Society (BDRCS) in delivering much-needed assistance to those who have lost their homes through the distribution of tarpaulins and shelter tool kits, according to a statement of the EU.

In addition, multipurpose cash grants are also being provided to targeted households to ensure those most in need have enough means to meet their basic needs and sustain their day-to-day livelihoods.

This funding is part of the EU’s overall contribution to the Disaster Relief Emergency Fund (DREF) of the International Federation of Red Cross and Red Crescent Societies (IFRC).

An increase in water levels in the Padna River -- the largest river system in Bangladesh- that has been severely affected by erosion since early September -- during the first three weeks of September led to the sudden collapse of many vulnerable portions of its embankment.

More than 8 000 houses and public facilities located within a five-kilometre radius from the river have been washed away, resulting in the displacement of more than 43 000 people in the Naria and Zajira sub-districts, alongside a 1.5-kilometre stretch of main roads and infrastructures.

It is estimated that over 8 000 people will become permanently displaced. The event has also caused significant damage to crops, seeds and agricultural lands, impacting the overall food security of the affected populations. Food shortages have also been reported.

The European Union together with its Member States is the world's leading donor of humanitarian aid.

Relief assistance is an expression of European solidarity towards people in need around the world.

German, Austrian leaders meet on migration ahead of EU talks