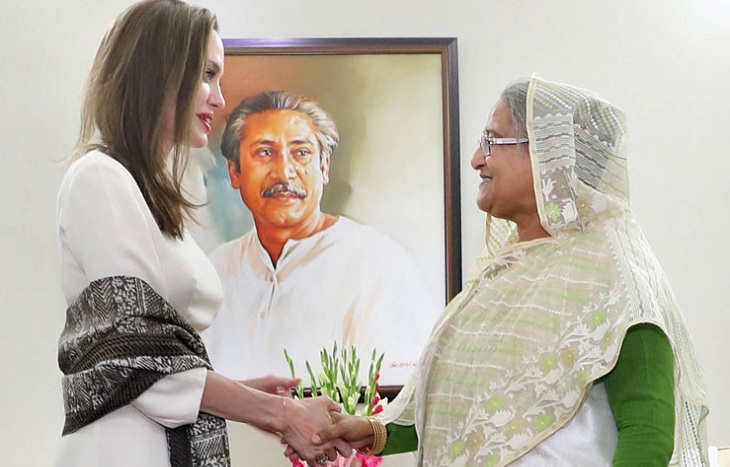 American actress Angelina Jolie has praised Sheikh Hasina’s leadership as “exemplary” for keeping Bangladesh’s border open for the Rohingyas who have fled violent persecution in Myanmar.

She says the world needs more leaders like her.

The special envoy of the UN’s refugee agency UNHCR paid a courtesy call on the prime minister at the Ganabhaban in Dhaka on Wednesday after visiting for two days the refugee camps in Cox’s Bazar where more than 1 million Rohingyas have taken shelter.

“She (Jolie) said the world needs more such leaders. She also said there are not many leaders like our prime minister in the world now,” Karim said.

Myanmar must create an atmosphere favourable for safe and dignified return of the Rohingyas before the repatriation process starts, the Hollywood star told Hasina, according to Karim.

Jolie said the UN and other organisations will continue working together so that Bangladesh can share the burden of refugees, the PM’s press secretary said.

Hasina told Jolie about her days in exile as a refugee after the killings of her father Bangabandhu and most other members of the family in 1975.

Jolie, who visited the Bangabandhu Memorial Museum to pay respect to the Father of the Nation earlier in the day, expressed her sadness after hearing about Hasina’s memories.

Hasina also expressed her frustration over Myanmar dillydallying in taking back the Rohingyas.

Both of them shared the stories of killings, rape and torture they had heard while visiting the Rohingya camps.

PM’s upcoming German visit to be a milestone: Quader