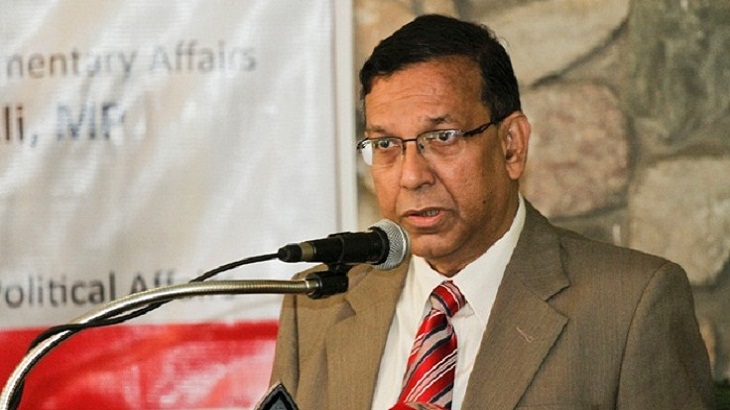 Law Minister Anisul Huq today said Philippine’s Rizal Commercial Banking Corporation (RCBC) has filed the defamation case against Bangladesh Bank in order to cheat with the people of their country.

That is why, Philippine’s government and senate had held RCBC responsible for hacking the Bangladesh Bank’s reserve, he said.

The minister said this while speaking to reporters after a meeting with Hiroyasu Izumi, Japanese ambassador to Bangladesh, at his secretariat office.

The law minister also said RCBC officials’ role to this effect did not really seem to be of legal conduct.

It will not be defamatory if Bangladesh Bank files any case against them through legal procedures, Anisul Huq said.

Philippine’s RCBC filed a defamation suit on March 6 against the central bank of Bangladesh for “baseless allegation” in connection with the $81-million cyber heist three years ago.

The case filed with the Regional Trial Court in Makati City of Manila was served to BB Deputy Governor Abu Hena Mohammad Razee Hasan and other officials, who were in Manila this week.

Law Minister Anisul Huq also said that Japanese Ambassador Hiroyasu Izumi sought support from Bangladesh to the Japanese candidate for the post of justice at the International Court of Justice.

“I told him [Japanese Ambassador] that we will inform the issue regarding our support to him after consulting with the prime minister as no candidate from Bangladesh will contest for the post,” he said.

The law minister informed Hiroyasu Izumi about the update of the proceedings of the Holey Artisan attack case, saying that the case is now under trial and the trial court has already recorded statements from 17 witnesses of the case.

Replying to a query, Minister Anisul Huq said the government has no plan to establish court at the upazila level.