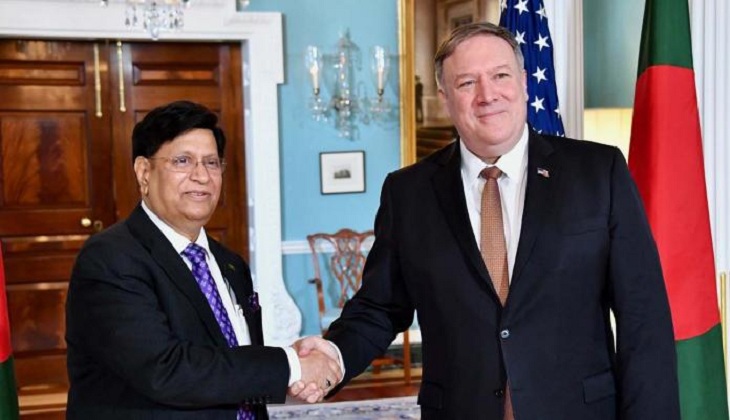 Foreign Minister AK Abdul Momen has met US Secretary of State Mike Pompeo in Washington on a wide variety of issues including trade and investment.

A press release dated April 8 says, the agenda of the discussion was Rohingya repatriation, deportation of Bangabandhu’s killer, Indo-Pacific, and trade and investment.

The US secretary pledged to stand beside Bangladesh on finding a permanent solution to Rohingya crisis, said the release of Bangladesh embassy in US.

Minister Momen sought repatriation of Bangabandhu’s self-confessed and convicted killer Rashed Chowdhury from the US.

Both leaders agreed that for greater prosperity in the Indo-Pacific region, vital energy and infrastructure projects need to be implemented on regional partnership basis.

Minister Momen sought more investment from the USA in the oil and gas sector and US presence in the Special Economic Zones.

He also sought US support to the candidature of Bangladesh in the upcoming election to the post of Deputy Director General of International Organization for Migration (IOM).

Bangladesh ambassador to the USA, Mohammad Ziauddin accompanied the minister at the meetings.