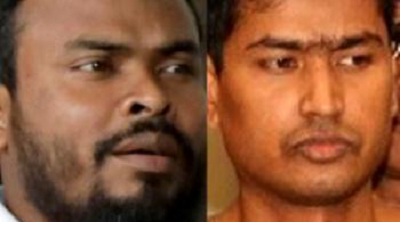 Two top militants convicted in the Holey Artisan attack have been shown arrested in the Gopibagh six-murder case.

Inspector Abdullah Al Nazrul of the Counter Terrorism and Transnational Crime (CTTC) department, confirmed the two being shown arrested in the case. He is the investigator in this case.

The CTTC of Dhaka Metropolitan Police has recently submitted a report to the court that said there was ample evidence of JMB members carrying out the Gopibagh killings. The convicts, Hadisur and Mamunur, were top leaders of the organisation when the killings were carried out, the report added.

The mystery of the murders could be unfolded in full once Hadisur and Mamunur were interrogated, CTTC department told the court.

According to the case statement, six people including Lutfar Rahman who claimed himself as the 'top soldier' of Imam Mahdi residing at house No. 64/6 at Gopibagh were slaughtered on 21 December 2013. The other five were Lutfar’s son Sarwar Islam along with Lutfar’s followers Manjur Alam, Md Shahin, Md Rasel and Mojibor Sarker.

Abdullah Al Faruk, son of Lutfar, filed a murder case with the Wari police station in connection with the incident.

"Six years have passed, still the police could not submit the investigation report," Faruk said. "I could not yet know who killed my father, brother and the others, and why," he added.

The CTTC, on 2 May, pleaded to the Chief Metropolitan Magistrate (CMM) court of Dhaka to show Hadisur and Mamunur arrested in Gopibagh case and asked for 10-day remand.

According to court sources, the court granted a three-day remand for each on Wednesday after the hearing.

One among the coordinators and arms supplier of Holey Artisan attack and a top militant leader, Hadisur Rahman, was detained from Bogura on 22 March last year.

Mamunur Rashid, another militant leader, was detained from Board Bazar, Gazipur on 22 January last. They are now in prison.

A number of 22 people including foreigners were killed in the militant attack carried out by the pro-ISIS militant organisation neo-JMB at Holey Artisan, a restaurant in Gulshan, Dhaka, on 1 July 2016.

The Wari police station carried out the first investigation over the six killings in Gopibagh. Later, detective branch of Dhaka Metropolitan police was assigned to run probes.

A number four including Syed Ziaul Islam, Ajmir Amit, Golam Sarwar and Al Amin were detained in connection with the Gopibagh six-murder case and they were interrogated too.

After the Gopibagh killings, former chairman of power development board, so-called Pir Khijir Hayat Khan, was killed at Badda in the capital on October 2015.

DB police investigated the Khijir murder. Militant Tariqul Islam was detained in connection with the case and he was shown arrested in Gopibagh case. Tariqul gave statement at Dhaka court over the six-murder. Another militant, Gaffar, was also shown arrested over the case.

One year after the Gopibagh killing, in August 2014, Mawlana Faruki was killed at East Raja Bazar in Dhaka. The case was probed by DB. Later the Criminal Investigation Department (CID) of police was assigned with the case.

Hadisur Rahman was shown arrested in the Faruki murder case last year and he gave a confessional statement at the court on 30 May 2018 saying JMB members killed Faruki.

All the Easter bombers either killed or arrested: SL police chief