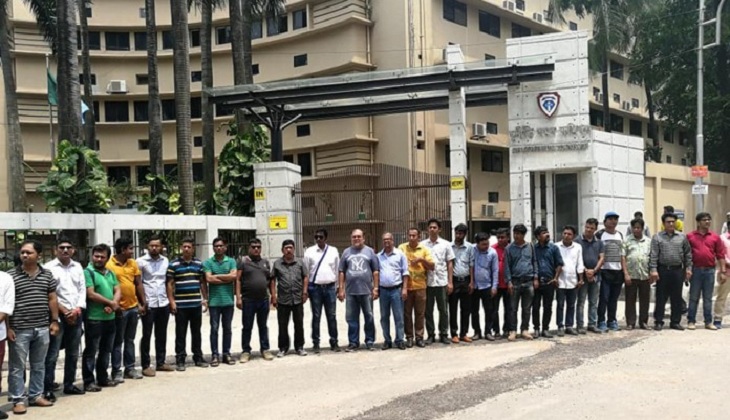 Journalists have protested against what they say is an “indecent summons” issued to a journalist by the state-run Anti-Corruption Commission over a graft issue.

They have gathered in front of the gates of ACC in Shegunbagicha, Dhaka, in the morning and formed a human chain.

The ACC yesterday asked a special correspondent of Bangla Tribune to appear before it for testimonial on the alleged bribing of its Director Khandaker Enamul Basir by suspended DIG of police Mizanur Rahman.

In a letter signed by ACC Director Sheikh Md Fanafillah, the graft watchdog asked journalist Dipu Sarwar to appear before its headquarters in the morning.

The letter also threatened of legal consequences against the journalist on noncompliance.

The online news portal on Sunday ran a report on the bribery allegation. Earlier, private television channel ATN News aired a report in which the DIG made allegation of giving Tk 40 lakh to Basir who “promised” him that he would exonerate him of all charges.

Meanwhile, earlier today, the ACC Chairman Iqbal Mahmood said if the enquiry officer did any wrong in summoning the journalist action will be taken against.

Talking to The Daily Star, ACC Public Relations Officer Pranab Kumar Bhattacharya said the language of summoning both accused and witness is defined in its rules.

"If any letter is issued violating rules, then it will certainly be withdrawn," he added.