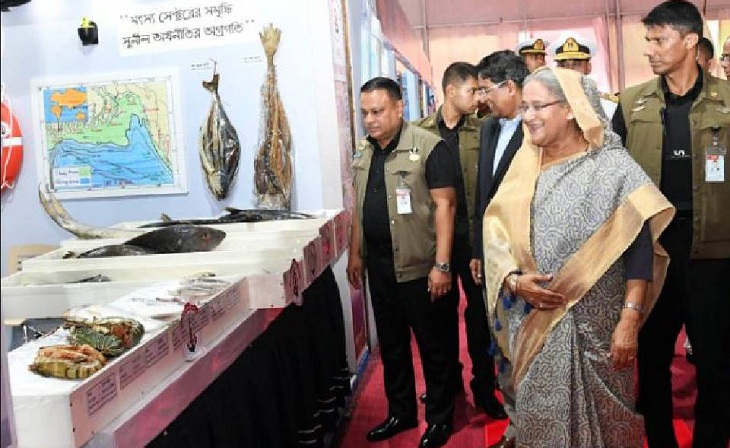 Prime Minister Sheikh Hasina on Thursday stressed the importance of maintaining the international standard of fish and fish products for export as riverine Bangladesh can grab the first position in the world in producing fish from inland water bodies.

“It’s very essential to maintain the quality of fish (and fish products) which we’re exporting to foreign markets,” she said while inaugurating the National Fish Week 2019 in the city.

The Department of Fisheries under the Fisheries and Livestock Ministry arranged the event at the auditorium of Krishibid Institution Bangladesh (KIB).

“The fish which we’ll export should be of good quality so that those can enter the international markets,” Sheikh Hasina said.

The Prime Minister mentioned that there had been some unpleasant incidents over fish export while shrimp export faced suspension in the past when BNP was in power.

Assuming office in 1996, she said, the Awami League government resumed the shrimp export.

According to the United Nations Food and Agriculture Organisation's report of 2018, Bangladesh ranked third in producing fish from inland water bodies in the world, she noted.

“Bangladesh is a riverine country. Inshallah, we’ll be able to grab the first place (in the world) in the future coming out of the third place,” Hasina said.

At the inaugural ceremony, the Prime Minister also distributed ‘National Fisheries Award 2019’ among a number of individuals and organisations for their contributions to the fisheries sector.

A video presentation was made depicting the country’s success in the fisheries sector.

Chairman of the Parliamentary Standing Committee on Fisheries and Livestock Ministry Dhirendra Debnath Shambhu was present at the dais.

Later, the Prime Minister opened a fish fair on the KIB premises.