Lots of trouble where relief is very little 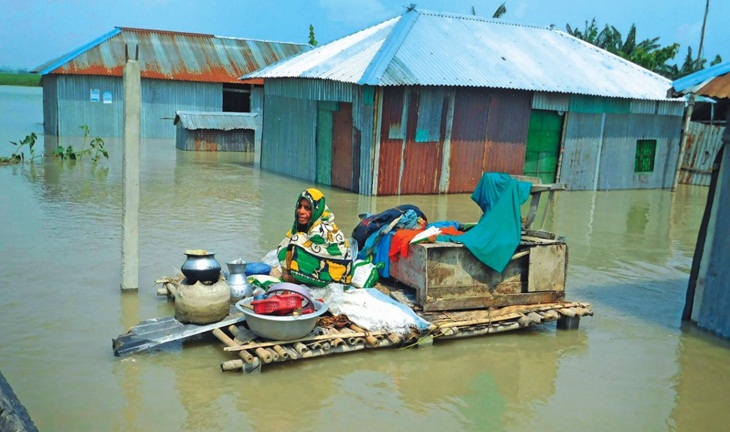 Haradhan Dey along with his elderly mother, wife and two children has been surviving on biscuits and dry foods for the past five days.

“No one has come to help us...we have not yet received any relief,” said the local of Dulal Member Bari area in Chattogram’s Raozan.

Haradhan’s family is one of 30 families marooned for five days in the waterlogged area. Many of them have not got any aid so far. Their predicament is similar to those of many others affected by the floods ravaging through the country.

Stranded in waterlogged areas, many victims remain unemployed, with little access to food and drinking water, a situation compounded by insufficient relief.

The number of such people is around 21 lakh.

Md Shah Kamal, senior secretary of the Ministry of Disaster Management and Relief, said the government arranged sufficient relief materials for those “who really needed it”.

“There are many flood-hit families, who are financially affluent. They don’t want to take relief. But those affected people, who are poor, are entitled to the relief,” he told last night.

While the allocation is there on paper, there are insufficient supplies of relief material in different districts.

“We did not get any relief. Rather, we have seen that many affluent families have got it,” said Hazrat Ali,58, a flood victim in Gobordhan village near the Teesta River basin in Aditmari upazila of Lalmonirhat.

“Around 1,200 families in our union have been hit by flood. But only 235 families have got relief materials,” said Matiar Rahman Mati, a member of Mahish Khocha union parishad in the upazila.

“We got only 10kg rice since the floods came a week ago. How can we survive on this,” said Abdul Jobbar, a day labourer of Sunoi village under Kalmakanda upazila of Netrokona, another area where few have got relief.

In Mymensingh, Md Rafiqul Islam, chairman of Pogla union, said he had so far distributed only five tonnes of rice and 60 packets of dry foods among 500 families. The number of affected families, however, is 4,000.

In yet another instance of insufficient relief, only five families out of the 50 sheltering at Kaliralga village under sadar upazila of Kurigram got 10kgs of rice while the rest got packets of dry food, and some flattened rice and sugar, Abdul Mannan, a flood victim said.

In Nilphamari, Moinul Islam, chairman of Tepa Kharibari union in Dimla upazila, said the actual number of flood-hit families in the union was around 1,680. But the upazila administration had enlisted only 880 for relief.

Allegations against the authorities tasked with relief distribution is rife in many other areas.

“They [authorities] announced to give 20kg rice to each affected families. But they are now giving us 10kg,” said Tong Pray Mro, a resident of Sualok union under sadar upazila of Bandarban.

“My name was not enlisted. That is why, I did not get any relief after visiting the relief distributing centre in the past three days,” said Mya Nu Prue Marma, 57, a resident of Bakichhara village of Bandarban.

In Tangail, two children drowned in the flood at Kalihati upazila yesterday. The deceased are Tanjila, 8, and her younger sister Lima, 5.

Anwar Hossain Pramanik, chairman of Durgapur union parishad, said Tanjila, a grade-three student and Lima, a grade-one student of a local primary school, were swept by a sudden current of water near their house and went missing in the morning.

Later, their bodies were found floating nearby at around 2:00pm, he said.

Train communications in some routes, including Jamalpur-Dwarnganj and Santahar-Lalmonirhat, remain halted due to flood, said a press release of the Bangladesh Railway.