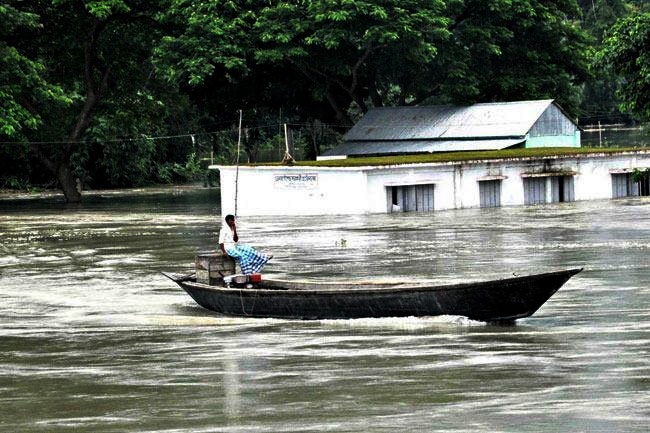 Flood situation has worsened in Manikganj while in Kurigram flood water has been flowing above the danger level.

The Jamuna river is flowing 82cm above the danger line at Aricha point till 9:00am today after it increased 20 cm in the last 24 hours, said Faruk Hossain, an official of the local Water Development Board.

Around 50,000 families of 70 villages of 30 unions of the district are affected in the flood who are living in dire conditions for lack of food and pure water.

At least 30 educational institutes have been closed after water entered the institution buildings in Daulatpur, Shivalaya, Ghior, Harirampur and Shaturia upazila of the district, according to District Flood Control Room at Manikganj.

"We have distributed eight metric tonnes of rice so far to the people affected by erosion. We are preparing to distribute more rice and dry food," he added.

The overall flood situation in Kurigram has remained unchanged as Brahmaputra, Dharala, Dudkumar and other major rivers in the district have been flowing above the danger level for the last 11 days.

Roumari, Rajibpur and Chilmari upazila headquarters were flooded following collapse of a portion of the town protection embankment.

Sufferings of the flood-hit people intensified due to crisis of pure drinking water and adequate relief materials.

Crops of 20,000 hectares were destroyed while 500 km road, 40km embankment and 41 bridges and culverts were damaged in the district.

Over 9,734 tube wells went out of order and submerged by floodwater, the sources said.

The District Administration sources said over 64,000 people took shelter in 186 centres in the district.

The district administration is also distributing water purification tablets and saline among the flood-hit people, he added.