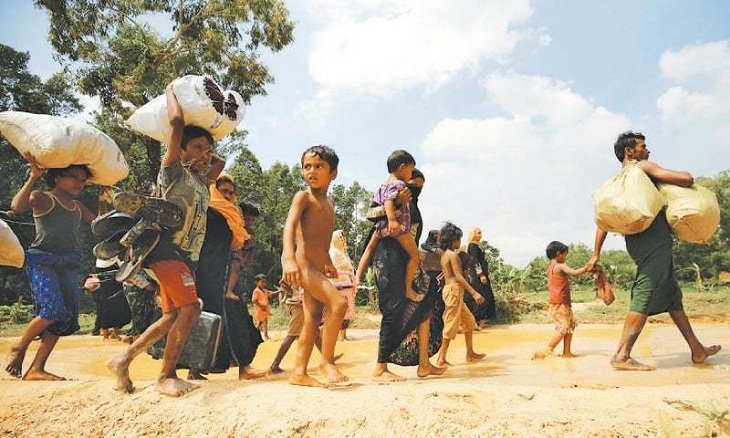 He made the remarks while talking to reporters after his maiden meeting with Foreign Minister Dr AK Abdul Momen at his office.

They discussed a number of “important issues”, including ways to find a sustainable solution to Rohingya crisis.

Despite all the preparations, no Rohingya turned up on August 22 to accept the “voluntary” repatriation offer to go back to their place of origin in Rakhine State of Myanmar. This forced the authorities to suspend the repatriation process.

China, which was on the ground during the latest repatriation attempt, is now trying to have a trilateral meeting with Bangladesh and Myanmar to find new ways to deal with the repatriation issue, said a diplomatic source.

More than 730,000 Rohingya fled to Bangladesh after the Myanmar military launched a brutal offensive targeting the mainly-Muslim ethnic minority on August 25, 2017. A UN fact-finding mission said the violence had “genocidal intent”.

The first batch of Rohingyas was scheduled to return on November 15 last year but it was also halted amid the unwillingness of Rohingyas to go back citing a lack of congenial atmosphere in Rakhine State.

Bangladesh and Myanmar signed a repatriation deal on November 23, 2017, but there has been little progress.

On July 29, Bangladesh handed a fresh list of 25,000 Rohingyas from around 6,000 families to Myanmar for verification before their repatriation.

With the latest list, Bangladesh has so far handed the names of around 55,000 Rohingyas to the Myanmar authorities and around 8,000 of them have been verified. Myanmar only cleared 3,450 Rohingyas for beginning the repatriation.

Meanwhile, Bangladesh will brief the diplomats stationed in Dhaka about the latest situation over the Rohingya issue this afternoon (Thursday) as two consecutive efforts to begin the repatriation of the displaced people failed.

Foreign Minister Dr Momen will brief the diplomats and representatives of the UN agencies at 4pm at State guesthouse Padma in the city.

The briefing may focus on the latest “thwarted repatriation” issue due to the “intransigence” attitude of Myanmar, said a senior official.

It may also highlight Myanmar’s blame game and the need to keep up the international pressure on Myanmar, especially on the eve of the United Nations General Assembly that begins in September, the official said.

UN Resident Coordinator in Dhaka Mia Seppo on Tuesday said it is now up to the world to help keep it that way by making sure Bangladesh does not shoulder this burden alone as Bangladesh has “certainly done its part” when it comes to the Rohingya crisis.

She said Bangladesh responded with empathy to a group of people who fell victims to hatred, and now the global leadership needs to act.

UN Resident Coordinator said the UN is committed to getting the right for both the Rohingyas and the people of Bangladesh as they deserve the world’s support in confronting problems related to Rohingyas.

“Any solution has to be sustainable. Sustainability is not something that can happen overnight. It takes time and thoughtful consideration for how everything we do today will set the stage for what’s possible tomorrow,” she said.

Meanwhile, a meeting of a taskforce was held at the Ministry of Foreign Affairs here on Wednesday that discussed the current challenges and what steps need to be taken in the coming days, said an official.

Bangladesh’s key missions abroad will also brief the respective countries on the Rohingya issue to expedite the process in finding a peaceful solution to the crisis.

We will return home together if citizenship granted: Rohingya leaders

US pushes for action, accountability to solve Rohingya crisis