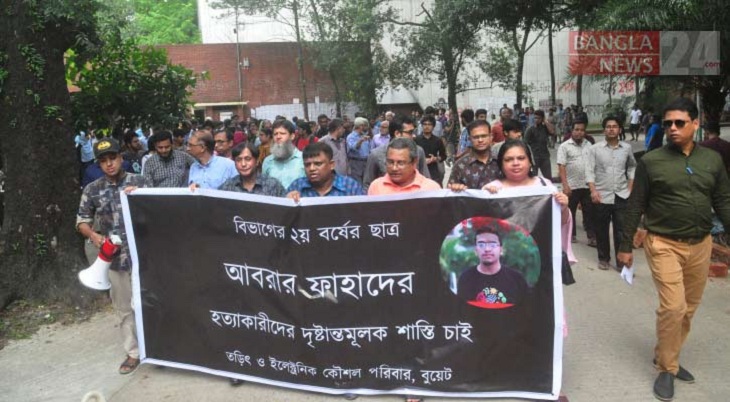 Teachers and students of the Department of Electrical and Electronics Engineering (EEE) at Bangladesh University of Engineering and Technology (Buet) brought out a silent procession on the campus demanding punishment to the killers of Abrar Fahad, a second year student of the department.

They brought out the procession around 10:00am and went around the entire campus.

Later, the teachers and students of the department staged a sit-in programme at the Shaheed Minar on BUET campus.

Abrar, a second-year student of Electrical and Electronic Engineering department of Buet, died after he was beaten allegedly by some Chhatra League men brutally at a dormitory of the university between 7:00 pm Sunday and 2:30 am on Monday.

The incident triggered a firestorm of protests on campuses across the country. Many took to social media to demand justice for Abrar.

Law enforcers suspect, Abrar was attacked because of one of his recent Facebook posts, which seemed to be critical of some recent deals with India.