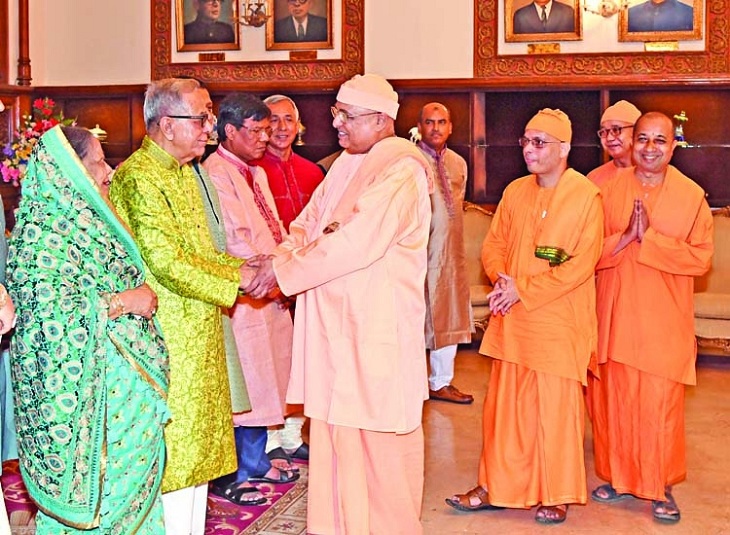 President M Abdul Hamid urged all to come forward to make the government’s ongoing drive successful to eliminate militancy, narcotics, extortion, gambling and corruption from the country as he hosted a reception for Hindu community on Durga Puja.

“Corruption is one of the key barriers to country’s socio-economic development . . . So all must come forward to make the ongoing anti-corruption drive successful,” he told the function at Bangabhaban here on the Bengali Hindu community’s biggest religious festival.

The president said everyone will have to make pledges to remove all sorts of wrong and immoral practices by devoting to the principle “I won’t do wrong and also, won’t allow others to do so”.

“And then the country will advance towards development and the cordial and peaceful society will be established,” the head of the sate observed.

Noting that establishing peace and humanity in the society are an eternal message of the religion, the president called upon all to abide by the norms of religion and simultaneously come forward for welfare of the human beings.

He said communal harmony is a longstanding Bengali tradition and people from all strata will have to take this tradition forward comprehensively.

Greeting Hindu community people on the occasion, the president wished for strengthening the existing bond among all people irrespective religions and castes.

President Hamid and his spouse Rashida Khanam exchanged greetings with the guests at the function.

Secretaries concerned to the President were present.

President for putting pressure on Myanmar for Roingya repatriation