Protest postponed for 2 days due to entry test 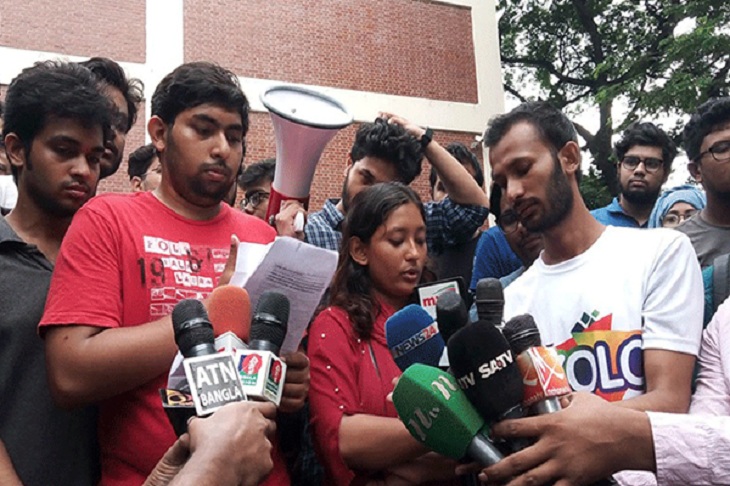 Students of Bangladesh University of Engineering and Technology have postponed their protest programme for two days in consideration of the university’s admission test.

“No protest programe will be held on Sunday and Monday as the test scheduled to be  held on October 14”, a spokesperson said on behalf of the protesting students.

The agitating students have decided to have faith on the university authorities as they have already taken noticeable steps in realising some of the students’ 10-point demand, the spokesperson added.

Earlier, the students started demonstrations near the central cafeteria around 11:45 am today demanding fulfillment of their demands before the university’s admission test scheduled to be held on Oct 14.

Their other demands are permanent expulsion of those involved in the murder of Abrar after submission of charge sheet, issuance of official notice on bearing all expenses of Abrar murder case by Buet administration and compensation to his family, sealing off offices the student wing leaders of political parties, and removal of illegal students from residential halls.

Besides, a common platform to be attached to the BIIS account to expose all incidents of bullying and harassment and bringing all the floors of each dormitory of Buet under 24/7 CCTV monitoring.

“I’m announcing a ban on all kind of organisational political activities on the campus,” VC said while talking to Buet students over their 10-point demands at the central auditorium.

Abrar Fahad, 21, a second-year student of electrical and electronic engineering, was beaten to death on Monday reportedly by Chhatra League leaders at Buet’sSher-e-Bangla Hall.

One more arrested over Abrar murder in Sylhet