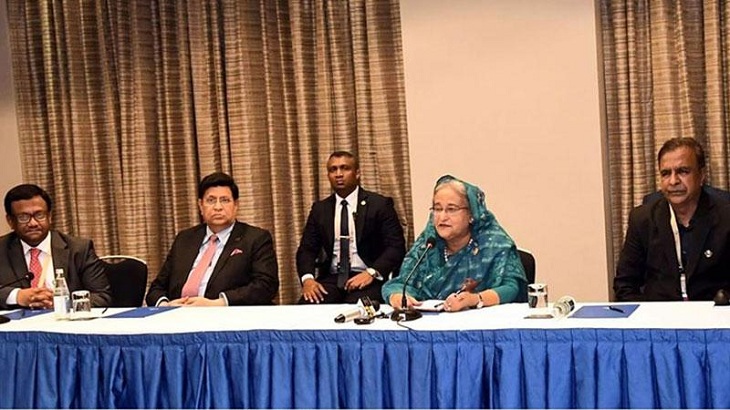 Prime Minister Sheikh Hasina has reissued a strong warning against the wrongdoers, saying that law will take its own course against those who will commit crimes.

“The law will take its own course against criminals whoever might be and whichever party they belong,” she said when expatriate Bangladeshis living in Azerbaijan called on her at Hotel Hilton Baku here yesterday evening.

The prime minister said: “You’ve seen that it (action) is continuing. If any of our party man is indulged in crime, he or she is getting punishment instantly.”

Sheikh Hasina, also the Awami League President, said the criminals are just criminals. “We’ll see criminals as criminals and we’re trying to see that,” she said.

The prime minister thinks that to give lesson to others, it should start from own house. “I’m doing that (drive against corruption) and I’m continuing it,” she said.

Referring to unbridled corruption committed by the then BNP-Jamaat government, she said there was no limit of graft during their five-year misrule.

Replying to a question from an expatriate about better treatment of BNP Chairperson Begum Khaleda Zia, the prime minister said the BNP leader is getting more facilities than other prisoners.

“A maid servant is serving jail due to willingness of Begum Zia. That means she (maid servant) is now in prison to provide services to the BNP leader,” she said.

Sheikh Hasina said the BNP chairperson is now undergoing treatment at Bangabandhu Sheikh Mujib Medical University (BSMMU) Hospital and she has been given a separate cabin there.

The prime minister said the BNP men are saying that she (Khaleda Zia) is sick. “I said that they could wage movement for her release,” she added.

“They (BNP) could not wage any movement or build up public opinion in this regard and they failed to do it,” she said. “But we’ve nothing to do and what can we do to this end?” she questioned.

Sheikh Hasina said Begum Khaleda Zia has been convicted in a case filed during the last caretaker government. “Some more cases against her are pending,” she said.

Sheikh Hasina said her government is continuing action against terrorism, corruption and drugs. “We’re getting very good results from the drives … narcotics destroy a person and family,” she said.

“Overall, I’m trying my best and as long as I remain in power I continue work for the country,” she said.

While talking about the Rohingya issue, the prime minister said discussion is underway with Myanmar to solve the problem. “We’ve constructed houses for one lakh Rohingya families in Bhashanchar …however, many NGOs don’t want they (Rohingyas) move to the island,” she said.

“Bangladesh is now a role model of development in the world due to this success,” she said.

The prime minister also recalled the contributions of the expatriates to the country’s socioeconomic development.

Sheikh Hasina said the government has so far purchased 10 aircraft from Boeing for enhancing air connectivity with different countries.

“We’ve taken initiatives to procure two more Boeing airplanes from the USA as well as three aircraft from Canada,” she said.

Hebron road to be named after Bangabandhu: Palestine FM

Rohingyas’ voluntary return is only solution: PM to NAM leaders