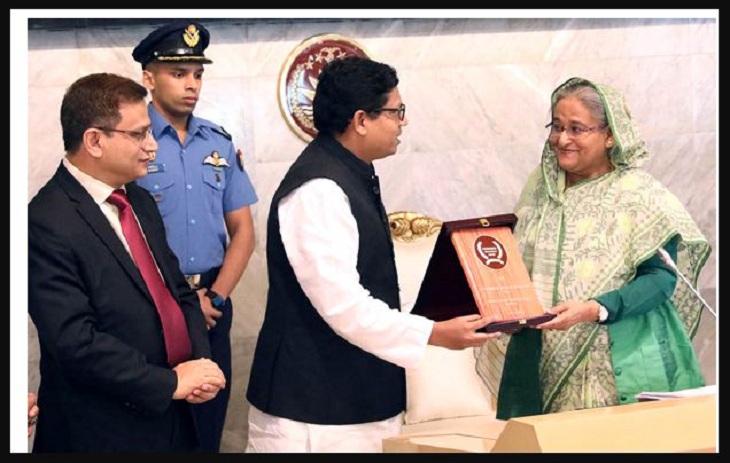 State Minister for Information and Communication Technology (ICT) Division Zunaid Ahmed Palak and its Senior Secretary NM Zeaul Alam handed over the awards to the premier at the outset of the regular cabinet meeting held at the Prime Minister’s Office  this morning.

Bangladesh Hi-Tech Park Authority has been adorned with the ‘WITSA Global ICT Excellence Awards-2019’ for playing an important role in the implementation of Digital Bangladesh and building infrastructure of the high- powered Hi-Tech Park.

The World Information Technology and Services Alliance (WITSA), known as the Olympic of the IT sector, in its 21st programme held in Armenia’s Yerevan on October 6-9 handed over the award to Bangladesh Hi-Tech Park Authority.

Meanwhile, the ‘4 Tier National Data Centre (4TDC) Project’ of the Bangladesh Computer Council under the ICT Division was awarded the ‘DCD APAC Award 2019’ in the Data Centre Construction Category.

DCD’s country director in Shanghai Johnson Yang handed over the award to Senior Secretary of ICT Division NM Zeaul Alam while he along with a delegation visited the main office of 4 Tier Data Centre’s manufacturing organisation ZTE Corporation Ltd in China’s Shenzhen city on September 17.

Besides, the Call Centre -‘333’of Central Data, Service and Complaint Management implemented by ICT Division’s a2i programme received the ‘GovInsider Innovation Award-2019’ as the ‘Best Citizen Engagement Project’ of Asia by the GovInsider.

The award was handed over at a function in United Nation’s Conference Centre in Bangkok, Thailand on October 16 last.

Dhaka to host next D-8 summit in April