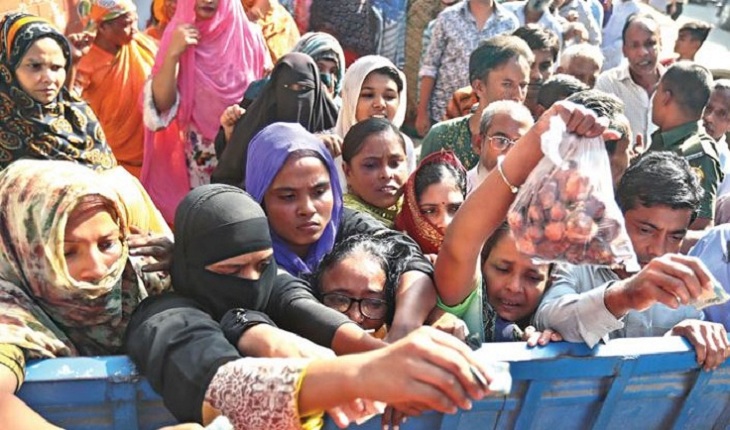 Onion price skyrocketed to Tk 200 per kg in the city on Thursday, breaking all the previous records and triggering outrage among consumers.

Price of local onion has increased by 340 per cent and the price of imported onion jumped by 416.67 per cent compared to the same time last year, according to Trading Corporation of Bangladesh (TCB) data.

Onion price has been on an upward trend over the last few months, but the latest spell has put the common people, especially the low, middle and fixed income groups at a difficult state.

Some unscrupulous businessmen are making huge profits amid the supply crunch of onion in the local market, market insiders said.

Chandi Das Kundu, field service wing director of Department of Agriculture Extension (DAE), told the Daily Sun that arrival of the early variety of local onion at the end of November will help rein in the skyrocketing price of onion.

On Thursday, the retail price of local onion was Tk 180 a kg in the morning, but the price soared to Tk 200-220 in the afternoon, according to traders at Karwan Bazar Kitchen market.

“Last week I didn’t buy any onion thinking that the price will come down from Tk 130 a kg. But today I had to buy the item at Tk 200 per kg,” said Hasibul Aman who was visiting a kitchen market in Mohammadpur on Thursday.

This year, DAE fixed the target to produce 23.810 lakh tonnes of onion from 2.110 lakh hectors of land against the country’s total demand of 33 lakh tonnes.

Onion prices jumped in the Indian wholesale markets in mid-September, resulting in a hike in its cost of import to Bangladesh. Many consumers alleged that syndicates of big traders and importers are bagging windfall profits though the domestic production was near to the demand.

The skyrocketing price of onion could not be contained despite the government’s efforts to strengthen market monitoring, import onion from others source and launch an open market sale of the item by the TCB.

Traders said onion price is unlikely to come down anytime soon as farmers don’t have any onion stock at their own possession at this time and the item is now being hoarded by the traders.

"Onion price manipulators should put in the crossfire"