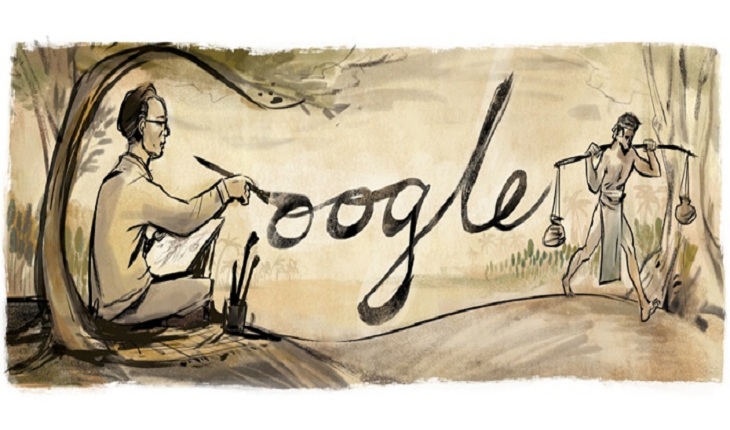 He is widely considered a founding father of Bangladeshi modern art. Throughout his colorful life, Zainul Abedin strived to preserve and honour Bangladeshi heritage.

Google Doodle made an alteration on its Bangladeshi homepage on Sunday, showing the great artist painting Google sitting under a tree with his brush while another man passing by carrying two pots.
Zainul Abedin was born along the Brahmaputra River in Mymensingh in 1914. He attended the Government School of Art in Kolkata studying European academic styles.

After completing his education, he was inspired to create an art piece that paid homage to the scenic views of his childhood, which won him the Governor’s Gold Medal at the age of 23.

Free to craft his own style, Zainul Abedin released a series of sketches in 1943 depicting an avoidable famine that affected the region, which is widely seen as his most popular work. He would continue to draw inspiration from the human experience throughout his career, such as with Struggle which was painted more than 30 years after his famine sketches.

To foster Bangladeshi cultural life, he established the first centre for modern art in the region with the Government Institute of Arts and Crafts (now the Faculty of Fine Arts) at the University of Dhaka in 1948. A decade later, he was honoured with his country’s highest civil award, the Presidential Award for Pride of Performance, for his cultural contributions.

Four years after Bangladesh gained its independence from Pakistan in 1971, Zainul Abedin opened the Folk Art Museum at Sonargaon and the Zainul Abedin Sangrahashala (a gallery of his personal collection) in Mymensingh to instill pride in native culture.

The International Astronomical Union named an impact crater on Mercury for Abedin in 2009, calling it “Abedin.”

Huawei has immediately lost access to Android and Google