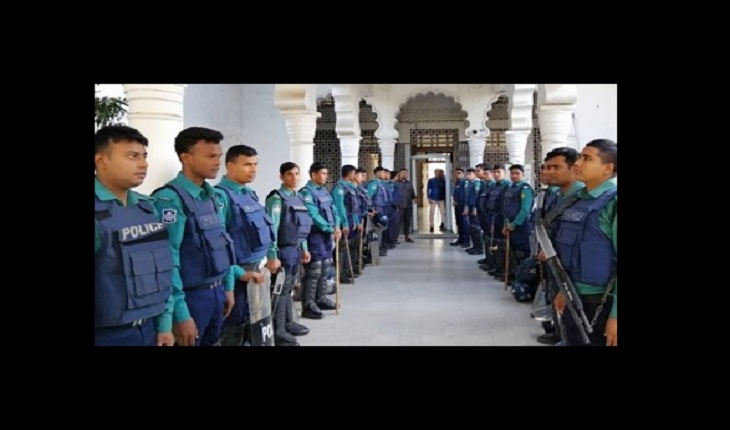 The authorities have ramped up security measures at the premises of the Supreme Court ahead of the hearing of bail request by BNP Chairperson Khaleda Zia in the corruption case of Zia Charitable Trust, in which she faces seven years in prison.

The bail petition is expected to be heard this morning by a division bench including Justice Obaidul Hassan and Justice AKM Zahirul Huq.

The High Court's cause-list for today shows the bail petition by BNP chief as number 1 item to be heard.

Police presence at the court entrance was enhanced with law enforcers searching anyone accessing the court premises for identity cards.

Earlier on Tuesday, Khaleda's lawyer, Khandaker Mahbub Hossain, submitted the petition to the court that fixed for the hearing on February 23.

The same day Khaleda Zia, through her lawyer, lodged the bail petition with the High Court.

In the petition, Khaleda's lawyers said that on health grounds she should be granted bail. Khaleda is not getting proper treatment at the Bangabandhu Sheikh Mujib Medical University (BSMMU) and she wants to go to London for better treatment, the lawyer added.

The ACC filed the Zia Charitable Trust case with Tejgaon police on 8 August 2011 against four people, including Khaleda Zia, for illegally raising and misappropriating the trust's fund.

On 29 October 2018, a special court in Dhaka sentenced the BNP president and three others in the corruption case for seven years.

Since February 8, 2018, Khaleda Zia has held prison sentence after a decision by the lower court in Zia orphanage trust corruption case sentenced her to five years in prison. The High Court later upgraded her jail term in the case to 10 years.