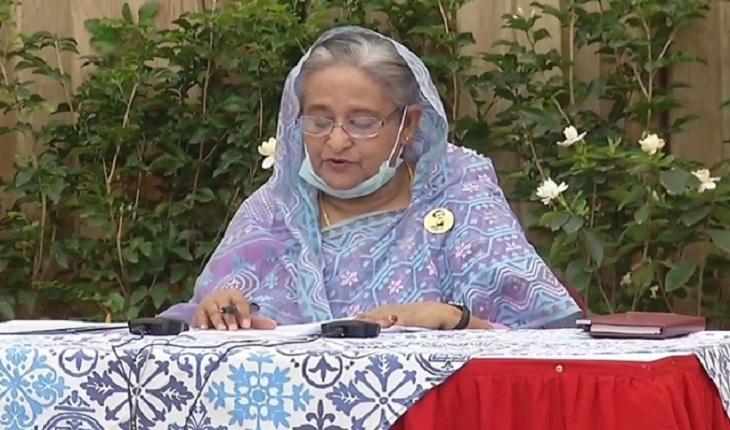 Prime Minister Sheikh Hasina on Sunday unveiled the government work plan to overcome the possible COVID-19 impact on the country’s economy, declaring an allocation of Tk 727.5 billion (Tk 72,750 crore) under a set of stimulus packages.

“Earlier I declared a Tk 50 billion (emergency) incentive package for paying salaries and allowances of export-oriented industries workers and employees and today I am announcing four fresh financial stimulus packages of Tk 67,750 crore,” she said.

In a nationwide televised address from her official Ganabhaban residence this morning, the premier said with the fresh allocations, the total amount of financial assistance would stand at Tk 72,750 crore, which is nearly 2.52 percent of GDP.

“I hope our economy will rebound and we could reach near the desired economic growth, if the stimulus packages, the previous and the fresh ones, could be quickly implemented,” she said.

The premier said the government simultaneously took four programmes under the work plan to be implemented in phases categorized as “immediate, short and long”.

Highlighting the key aspects of the four new packages, the premier said the first of the four packages involved Taka 30,000 crore, to be provided to affected industries and service sector organizations as working capital through banks as low-interest loan.

She said the commercial banks would provide the amount as loans from their own funds to concerned industries and enterprises on the basis of bank-client relations.

“The interest rate of this lending facility will be 9 percent, and the concerned industries and business organisations will pay 4.50 percent interest, meaning half of the interest of that loan, while the government would pay remaining half to banks as subsidy,” she said.

Sheikh Hasina said under the second package, small and medium enterprises (SMEs) including cottage industries would get Taka 20,000 crore as working capital.

She said a mechanism would be devised to reach the amount to the SMEs as low-interest loans through banks which identically will disburse amounts to the SMEs on the basis of bank-client relations while the government in this case would bear the greater share of the interest amount.

“The interest rate of this lending facility will be 9 percent and the concerned industries and business organisations will pay 4 percent interest of that loan, while the government will provide the remaining 5 percent as subsidy,” the premier said.

The fourth package, she said, was meant for enhancing Bangladesh Bank’s Export Development Fund or EDF size from US$3.5 billion to $5billion to facilitate raw materials imports under back-to-back LC.

The prime minister said this last package would result in adding an amount of additional Tk 12,750 crore equivalent to $1.5 billion to the EDF while its interest rate would simultaneously be brought down to 2 percent.

The prime minister said under the fourth package, the central bank will introduce a new credit facility of Taka 5,000 crore as “Pre-shipment Credit Refinance Scheme” and its interest would be 7 percent.

Sheikh Hasina said local products alongside the export sector would deserve special attentions and supports to cope with the possible global and domestic economic crisis caused by the pandemic.

“In this regard, I call upon all to boost production of local products and raise their use,” she said.

The prime minister said as a nation the people of Bangladesh have a wonderful strength of patience and capability to rebound fast by enduring blows of any type.

“Nothing could suppress us as a nation which snatched the independence in 1971 in only nine months responding to the call of Father of the Nation Bangabandhu Sheikh Mujibur Rahman and may Allah protect the world people from this pandemic,” she said.

Decision on suspension of court activities after talks: CJ