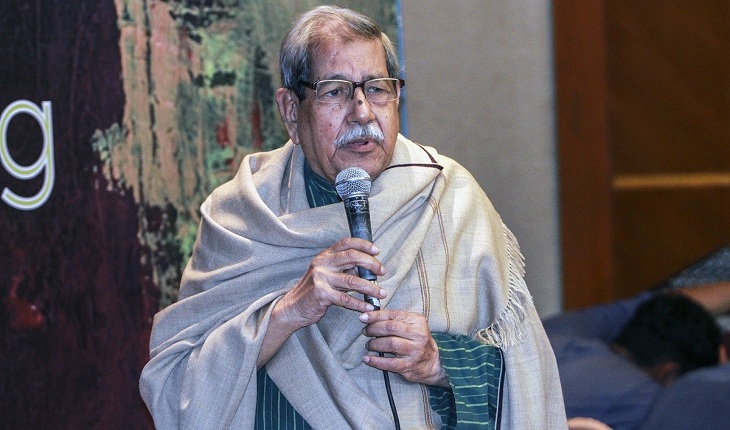 National Professor Dr Anisuzzaman passed away on Thursday ( 14 May ) at a hospital in the capital at the age of 83.

He breathed his last at 4:55 pm on Thursday at Combined Military Hospital in the capital, said sources at the Prime Minister’s Office.

Later, he was shifted to Combined Military Hospital (CMH) in the capital from Universal Medical College Hospital on Saturday (May 9) afternoon.

Dr Anisuzzaman was an eminent educator, writer and Emeritus Professor of Bangla language and literature department at the Universities of Dhaka (1959-69 and 1985-2003). He also taught Bengali literature at Chittagong University (1969-85).

Dr Anisuzzaman participated in the Language Movement, the 1969 Mass Upsurge and the Liberation War. After the independence, he became a member of the National Education Commission with Kudrat-E-Khuda as its chief.

He had conducted outstanding research on the history of Bengali literature and received the Bangla Academy Literary Award, the Independence Award and the Ekushey Padak. He also won many international awards for his contributions to literature.

Prof Anisuzzaman was a visiting fellow at the University of Paris (1994) and the North Carolina State University (1995) and a visiting professor at the Viswa Bharati (2008-09). He has been a recipient of the Bangla Academy award for research (1970) and the Ekushey Padak, an award given by the state, for his contribution to education (1983). The Rabindra Bharati conferred an honorary D.Lit (2005) on him and the University of Calcutta the Sarojini Basu Medal (2008).

He was a member of the Planning Commission to the Government of Bangladesh during the liberation war and the President of the Bangla Academy afterwards. He was elected a fellow of the Asiatic Society of Bangladesh.