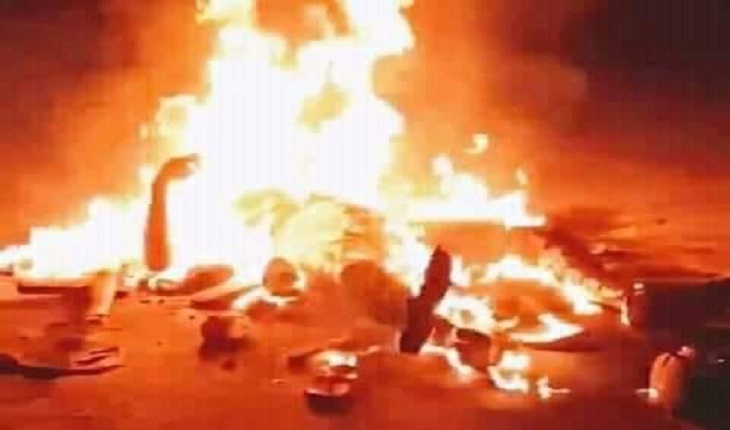 Angry locals in Lalmonirhat's Burimari reportedly beat a man to death and then burned his body in the district's Patgram upazila on charges of hurting religious sentiment.

Shahidunnabi Jewel, aged about 50, a former Rangpur Cantonment Public School employee, was named as the deceased.

Another guy, called Sultan Jubaer Abbas, was also beaten by the mob, leaving him injured.

A number of people, including ten policemen and three members of the UP, who were trying to stop the crowd, were wounded.

Jewel and Abbas came to Burimari from Rangpur on a motorcycle, according to the local administration, and offered Asr prayers at the mosque.

They told the imam that "JMB militants were there" after offering prayers and wanted to search the bookshelf inside the mosque.

Reportedly, while looking, the duo threw away the Holy Quran. Soon after that, the locals took the men away and an angry mob began to beat them.

Then Hafizul Islam, a member of Union Ward No-1, took them to the nearby Bhaban Union Parishad Council and confined them there.

Hundreds of people gathered there as words spread through the area. We have been trying to keep them [the two] in our care. But the mob stormed the building and snatched one of them, ”said Abu Sayeed Newaz Nishat, chairman of the Burimari Union Parishad.

People beat Jewel up after taking him away from the Union Parishad building and set him on fire on the Burimari Bazar main road, he added.

After 9:00pm, video clips and photos of the victim's burned body went viral on social media.

Confirming the news, Deputy Commissioner of Lalmonirhat Abu Jafar said that the man was from Rangpur town and had allegedly been suffering from a mental condition.

"Law enforcers have been deployed in the area to avert any untoward situation. I am now on the spot, and can let you know the details later," the DC added.

4 of a family burnt in pressure cooker blast in Lalmonirhat

Around 4,000 disconnected as road collapses beside Dharla