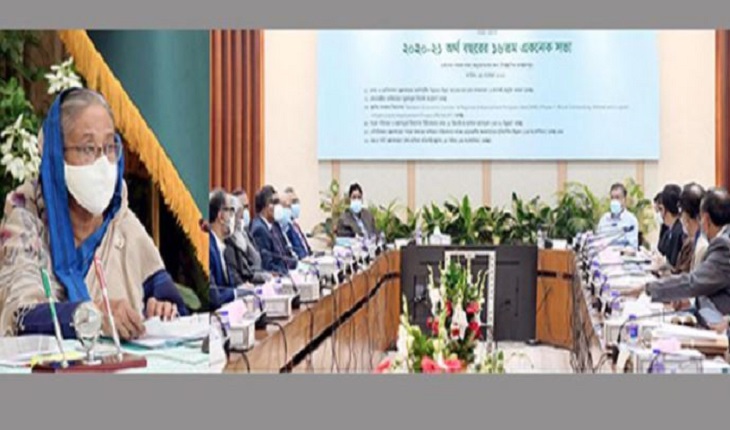 The government approved two separate projects on the Western Economic Corridor and Regional Enhancement Programme (WeCARE) Phase 1 including the WeCARE Phase-1: Jhenidah-Jashore Highway (N-7) Development project with an estimated cost of Taka 4,187.70 crore in a bid to upgrade 48.50 KM highway to six lanes including service lanes on both sides.

The approval came from the 16th meeting of the Executive Committee of the National Economic Council (ECNEC) in the current fiscal year (FY21) held today with ECNEC Chairperson and Prime Minister Sheikh Hasina in the chair.

Briefing reporters virtually after the meeting, Planning Division Senior Secretary Md Ashadul Islam said that the meeting approved a total of seven projects involving an overall estimated cost of Taka 10,702.23 crore. “Of the total project cost, Taka 6,459.27 crore will come from the Government of Bangladesh while the rest Taka 4,242.96 crore as project assistance,” he added.

Of the approved seven projects, five are new while two others are revised projects.

The Roads and Highways Department under the Road Transport and Highways Division will implement the project by December 2023 as the Prime Minister has reduced the stipulated timeframe for completing the project by two years. Of the total project cost of Taka 4,187.70 crore, the World Bank will provide Taka 2,705.65 crore while the rest Taka 1,482.04 crore will come from the government fund.

The main project operations include some 151.004 hectares of land acquisition, 48.50km pavement construction, 63.42 lakh cubic meter earth work, construction of one flyover with 1,647.29 meter flyover and four bridges with a length of 198.12 meter, construction of 55 culverts, 12 pedestrian over bridges and one underpass alongside necessary consultancy services.

The main project operations include 611km road development, installation of 120 waste management units, maintenance of 611km upazila, union and village Roads as the scheme aims to ensuring overall socio-economic development of these four districts through transportation of farm produces, its marketing, distribution and preservation through improvement of the rural communication system.