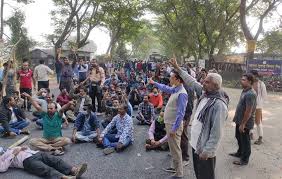 Bangladesh Sugar and Food Industries Corporation (BSFIC) has recently announced that it would close operations of six sugar mills in a bid to reduce losses, a move that sparked outrage among the mills' workers.

However, the state-owned sugar supplier still has nine other sugar mills where the displaced workers will be employed for the time being, said BSFIC Chairman Sanat Kumar Saha.

Besides, the shuttered mills will undergo modernisation in a bid to make them commercially viable once again, he said.

This led to protests from the workers of Pabna Sugar Mills, who staged a sit down on the Pabna-Rajshahi highway last Thursday.

Local law enforcement had to eventually intervene after the agitating crowd set a fire in front of the factory's main gate.

"We have decided to close the mills for modernisation as well as to reduce operational costs and minimise losses," said BSFIC Chariman Saha.

However, he did not divulge exactly how far the company expects its losses to drop following this move.

Saha did, however, say that the BSFIC faces losses of Tk 937 crore on average each year.

The BSFIC also has the liability of Tk 7,895 crore in bank loans and owes about Tk 521.76 crore as arrears to its workers.

Although the mills will remain closed for some time, the BSFIC will continue to pay the salaries and allowances owed to its employees, Saha said.

"They will also have the option to work at our other mills," he added.

Around 3,000 workers are employed by the six mills, which will be modernised through a joint venture with Japanese and Thai investors.

These mills are about 60 years old but their economic lifespan ended at least 30 years ago, according to the BSFIC chairman.

Now, modernisation is needed to ensure their commercial viability, he said.

The two organisations have already started a feasibility study on the project but progress has been slightly slow due to the ongoing coronavirus pandemic.

Meanwhile, another renowned firm based in Thailand, the Sutek Engineering Company, will provide the technology required to update and diversify the products of Bangladeshi sugar mills.

As per the new plan, the BSFIC will produce alcohol, bio fertilisers and energy as by-products of their regular operations.

"Now, negotiations on modalities of implementation are ongoing," Saha said.

The BSFIC chairman also said that foreign investors will introduce high yielding sugarcane plants to local farmers so that they can supply enough raw materials to make the mills profitable again.

Saha went on to assure that although Japanese and Thai investors would operate the mills, they would still employ the existing workers.

The BSFIC emerged as a single corporate body in 1976 following a merger between the Bangladesh Sugar Mills Corporation and Bangladesh Food and Allied Industries Corporation.

The government established the organisation in order to help build up the national economy through the implementation of an industrial policy, where the plan was to make quality substitutes available for imported products like sugar.

Dilip Kumar Sarker, managing director of Shyampur Sugar Mill, said he received a notice that ordered the mill's closure for the rest of the current fiscal year.

According to the managing director, a total of 762 employees, including both the temporary and permanent ones, work at his mill, which processes about 1,000 tonnes of sugarcanes daily.

Around 992 employees work at this mill, which has an annual sugar production capacity of around 15,000 tonnes, he said.

Khan also informed that the notice he received directed his mill to collect sugarcane from farmers to provide to three other nearby mills.

"But there was no direction about the salary and allowance of the staff," he added.

The six mills collectively faced about Tk 380 crore in losses for the last fiscal year.