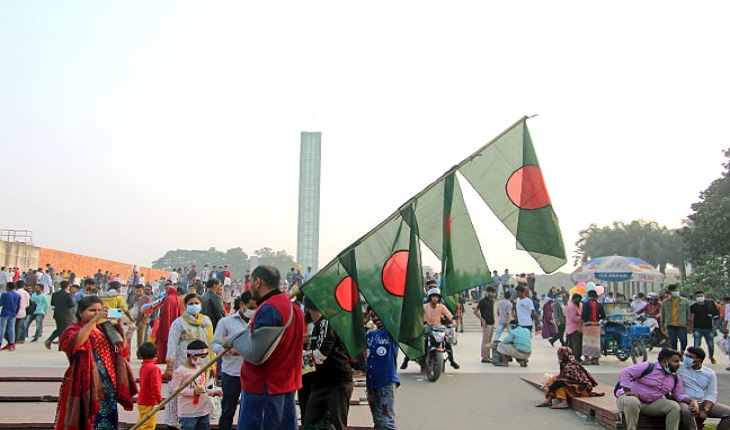 The country today celebrated the 50th Victory Day recalling moments that had marked the emergence of Dhaka as the free capital of independent Bangladesh with occupation Pakistani troops’ unconditional surrender.

Military secretaries to the President and the Premier placed wreaths on their behalf at the National Memorial at suburban Savar in the early morning ceremony while the COVID 19 prevented their physical presence at the scene.

Armed forces bugles played the last post as the military aides placed the wreaths when as part of military rituals the National Flag was gradually revealed, then lowered to half-mast position and then revealed again.

An integrated military, navy and air force contingent offered the honour guard to mark the ceremony.

Thousands of people representing different political and other organisations then thronged the Memorial’s main altar to offer their floral tributes.

Many people visited the site in their individual capacity though the pandemic required extra cautions, scaling down the usual festivity.

The president and Prime Minister earlier issued statements greeting the countrymen on the occasion of the Victory Day.

“On this day in 1971, we achieved our long-cherished victory after a long struggle and bloodshed war,” President M Abdul Hamid said in his message, recalling particularly Father of the Nation Bangabandhu Sheikh Mujibur Rahman as the architect of the independence alongside the freedom fighters.

The premier in her message recalled the 24 years of struggle in years ahead of 1971 under the leadership of “our great leader, the greatest Bangali of all time, the Father of the Nation Bangabandhu Sheikh Mujibur Rahman”.

“We admire the sacrifice of millions of martyrs through turning
Bangladesh into a developed, prosperous, hunger and poverty-free and
non-communal Bangladesh,” she added.

The pandemic forced Bangladesh this year to scrap the traditional parade at the National Parade Ground due to the COVID-19 pandemic.

But the Victory Day this year came with an extra significance as it coincided with Father of the Nation’s birth centenary celebrations, just a year ahead of the golden jubilee of independence.

The government earlier urged the people to celebrate the day maintaining health guidelines against coronavirus while as part of the countrywide celebrations wreaths were placed as well at martyrs monuments.

National flags dominated the skyline across Bangladesh while government, semi-government and other major structures were illuminated with colourful lights.

Main streets were decorated with festoons while the pandemic prompted different government organisations, political parties and cultural groups to stage discussions and other programmes on virtual platforms.