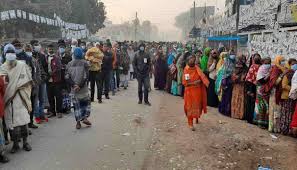 Two back-to-back deaths in the past 24 hours have cast a pall on the election to the Shailkupa municipal corporation slated for this month-end.

In the wee hours of Thursday, police fished out the body of a rebel Awami League councillor candidate from Kumar River in Jhenaidah’s Shailkupa upazila, barely four hours after a ruling party candidate's brother was found murdered.

The deceased were identified as Alamgir Khan Babu, a rebel AL councillor candidate, and Liyakot Hossain Boltu, brother of AL candidate Swahkat Ali. Though police initially suspected that Alamgir drowned in the river, they have now initiated a full-fledged probe into his death.

This was after local residents claimed to have spotted two men crossing the river a couple of hours before the body was discovered. Officer-in-charge of the Shailkupa police station, however, said the actual reason of death would be revealed after an autopsy. Both the bodies have sent for post-mortem, he added.

On Tuesday night, opponent candidate Alamgir's supporters had allegedly clashed with Swahkat's men and severely injured his brother Liyakot. He later succumbed to his injuries. Political analysts are now concerned over a possible rise in violence in the upcoming civic body polls.