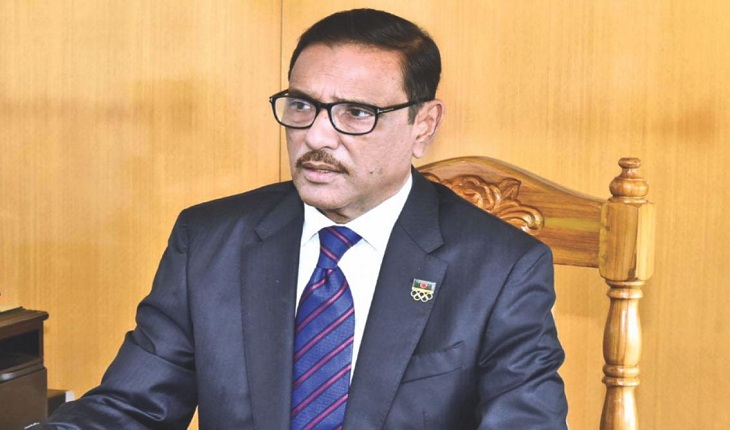 Awami League General Secretary Obaidul Quader today said the people have replied to BNP’s falsehood centering the polls by exercising their franchise in a huge number amid festivity and enthusiasm in the 2nd phase municipality elections.

He told a press conference from his official residence on parliament premises here after the end of voting in the second phase municipality polls this afternoon.

Quader, also Road Transport and Bridges Minister, said BNP is not getting any support in their evil attempts to make the country’s election system questionable as the people don’t believe in BNP’s falsehood anymore.

“BNP sometimes loses their confidence in surviving in the election field and carries out their evil efforts to continue their negative political traditions of leaving the polling field raising imaginary allegations,” he said.

He said though BNP opposed the voting in electronic voting machine (EVM) system in purpose-oriented way, the people cast their votes through EVMs smoothly.

The people have already become habituated to use digital technology but BNP’s mentality stills remains in analog state. That is why BNP is opposing the system, he added.

The AL general secretary extended congratulations to voters for their spontaneous participation in the election and thanked the Election Commission for holding the polls in a peaceful and proper manner.

Mentioning that win or defeat is must in polls, he also extended thanks to all candidates for contesting the polls to make stronger the local government institutions to take ahead the democracy.

Massive participation of voters in the EVM system proves that the popularity of EVM is increasing gradually, he added. He said though BNP talks about transparency, they remained stuck in the backdated and backward mentality.

Quader said though BNP candidates expressed satisfaction over the election atmosphere and exercising of voting rights, the party’s central leaders are making criticism only for criticism which is very  sad. He said the voters of Basurhat municipality in Noakhali district has replied to BNP’s falsehood over the country’s culture of polls.

BNP candidate in Basurhat municipality polls stated to the media that the elections was held in a free and fair manner, he said urging BNP secretary general Mirza Fakhrul Islam Alamgir to realize the talks of his own party candidate and refrain from his habit of ‘beating about the bush’.

Noting that there was massive eagerness in media as well as in political arena centering the Basurhat municipality polls, the AL general secretary said elections were held in a free, fair, peaceful and participatory manner. He said the elections were held in EVM method for the first time in Basurhat municipality and voter turnout was over 60 percent.

“Mirza Fakhrul ‘Saheb’ attacked him personally. Though I didn’t reply to him, the voters of Basurhat replied to him for the attack through their peaceful and spontaneous participation in the elections,” he said. He said many people dubbed the Basurhat as model for the holding of transparent polls there.

“BNP loses before their defeat in the polls. They fear to take to street as well as wage movement,” he said.