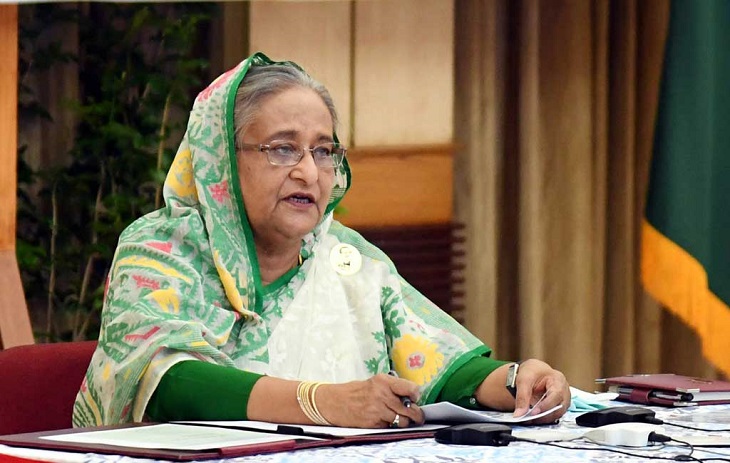 Prime Minister Sheikh Hasina on Thursday said Bangladesh continues its discussions with Myanmar with a friendly attitude for the repatriation of Rohingyas without engaging in any conflict for the sake of regional security and development.

"Responding to the call of endangered humanity, we’ve given shelter to around 10 lakh Rohingyas despite various limitations, including internal resource constraint. And we didn’t engage in conflict with anyone for the sake of regional security and development apart from creating scopes so that the forcibly displaced Myanmar citizens can return to their homeland,” she said.

The Prime Minister said this while addressing the graduation ceremony of the Defence Services Command and Staff College (DSCSC) 2020-21 Course at Sheikh Hasina Complex in Mirpur Cantonment in the city. She joined the program virtually from her official residence Ganabhaban.
Sheikh Hasina said Bangladesh is continuing the discussions with Myanmar so that they take back their citizens.

"We’re carrying out a discussion with a friendly attitude, but we must say who’s doing injustice…they must take back their nationals and we want that," she said.

Talking about coronavirus, Hasina said this virus brought the entire world to a standstill, dealing a serious blow to every sector, including socioeconomic development.
"In this condition, we’re continuing our efforts for maintaining all the development activities, including the economy apart from ensuring health security of the people of the country," she said adding, "We’ve achieved successes in many sectors."

Hasina said the vaccination programme in Bangladesh has started following the arrival of a vaccine. “We’re dealing with the virus.”

The Prime Minister said the importance of the Armed Forces is unlimited in the context of safeguarding the country’s independence and sovereignty.

Realising it, the Father of the Nation took necessary steps soon after the independence to develop a disciplined and professional armed force in the country and formulated a defence policy to this end, Hasina said.

She explained that following the policy of Bangabandhu, the government formulated the Forces Goal-2030 to further develop, expand and modernize it and is now working to implement it.

Hasina said Bangladesh attaches importance to the foreign policy of the Father of the Nation “Friendship to all, malice to none” and her government is very active to take the inter-country relationships to the highest level.

She elaborated the various steps taken by her government for the development of various sectors, including digitalisation, power, education, healthcare and other sectors.

About the DSCSC, she called it as the most modern training and educational institution and hoped that the graduating officers would play their due roles in developing Bangladesh as a stable, sustainable and selfdependent country through their skills, knowledge and experience.

The DSCSC has been able to continue training courses safely through an e-learning solution system introducing its own server and internet network, the Prime Minister said expressing satisfaction for the success.

Sheikh Hasina said such arrangements have made it possible to continue the course without any break, not even for a single day, during this coronavirus pandemic.

Earlier, the Prime Minister handed over graduation certificates among the course participants virtually.

A total of 225 officers of the Army, Navy and the Air Force, including 43 officers from 16 foreign countries, successfully completed a year-long training course at the DSCSC.