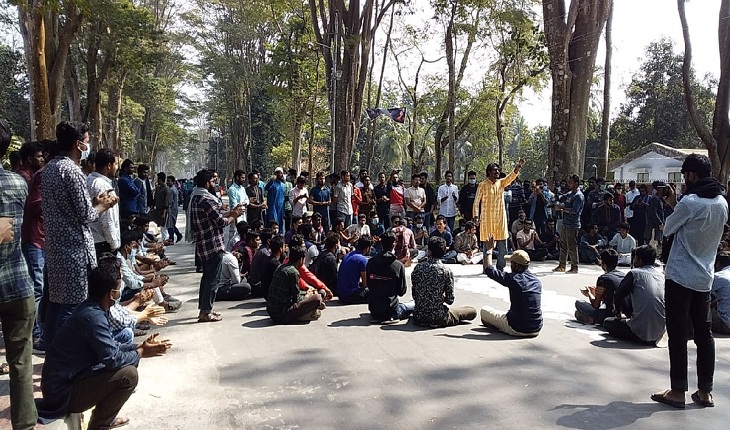 Addressing the protest rally,  Islamic History and Culture department student Mahmud Saki said, “Jahangirnagar University students started unlocking the main gates of their residential halls but we haven’t yet done such thing. That does not mean that we will not do such thing.”

“Everything has become normal across the country except academic activities at public universities. School, college students are getting auto-promotion, private universities started taking exams long ago, the national university is also started taking exams. But we are deprived of education facilities during the last one year. We want reopening of campus and residential halls as early as possible,” he also said.

“We can’t reopen the campus and halls without government order. We will take steps to reopen halls after getting government clearance,” RU proctor professor Lutfor Rahman told UNB.
Demonstrations at JU

Jahangirnagar University students on Saturday unlocked the main gate of a dormitory as the authorities ‘did not take’ any step to fulfill their 3-point demand, including hall reopening.

A procession of students protesting Friday’s attack on them by some residents of an adjacent village reached Fazilatunnesa Mujib Hall around 12:30 pm and unlocked the gate.

They also threatened to take control of other halls and go for a tougher movement if their demands are not met.
Prof Motahar Hossain, president of JU Hall Provosts Committee, said: “We can’t reopen the varsity halls defying the government’s decision.”

On Friday, several students of the university were injured in an attack by the residents of a village adjacent to the campus.

Four motorcycles belonging to the students were set ablaze by locals at Gerua Bazar in the evening. Later, locals gathered in the area responding to an announcement from a mosque’s loudspeaker and attacked the students.
Proctor Hasan said some students were confined to their mess-house at Gerua village.

On March16 last year, the government closed all the educational institutions to prevent the spread of coronavirus. The closure was extended several times, most recently until February 28 this year.

Bangladesh recorded 350 more Covid-19 infections in 24 hours until early Saturday.
With the new cases, some 543,024 people have so far been tested positive for the virus in the country since the firstcases were detected in March, 2020.