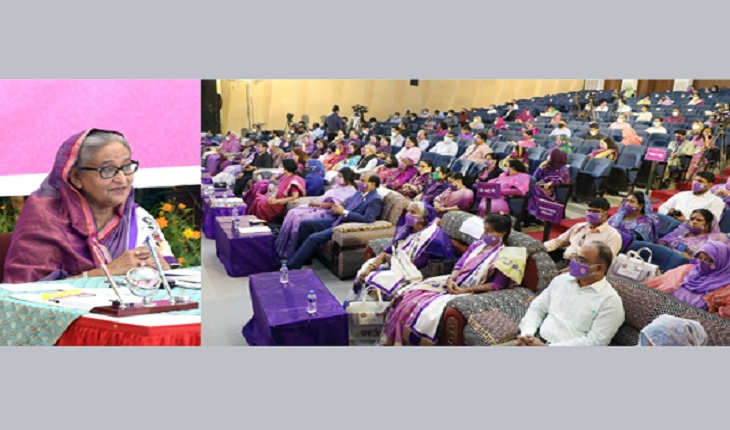 Prime Minister Sheikh Hasina today called upon the country’s women to be more qualified through education and training to attain their own rights.

“Right has to be achieved and quality is needed to attain it. And this quality would come through education and training,” she said.

The premier made this call while addressing a ceremony as the chief guest, joining virtually from her official Ganabhaban residence.

The Ministry of Women and Children Affairs organized the function at Bangladesh Shishu Academy Auditorium to mark International Women’s Day- 2021.

Sheikh Hasina told the women that no right is realized through shouting and delivering an address rather it comes on the basis of skillfulness.

Referring to Father of the Nation Bangabandhu Sheikh Mujibur Rahman’s move to make primary education free and compulsory for women, she said her government is now providing scholarships up to higher education where over 70 percent beneficiaries are female students. The premier said, “Both male and female are needed to be educated to build the society.”

Noting that women would have to play a contribution to any achievement, she said men and women have to work in the combine to forward the society ahead.

Sheikh Hasina said, “Bangladesh has attained the acknowledgment of a developing nation and on the occasion of the Golden Jubilee of the country’s
independence, our desire is that both men and women will keep continuing this progress.”

On the occasion of International Women’s Day-2021, five successful women were given the best Joyeeta awards with crests and money. They are Hasina Begum Nila, Miftahul Jannat, Mosammat Helennesa Begum, Robijan, and Anjana Bala Bishwas.

Women and Children Affairs Secretary Md. Sayedul Islam delivered the welcome address while Hasina Begum Nila also spoke on behalf of the Joyeeta Women. At the outset of the ceremony, an inauguration song and a documentary on Liberation War, Mujib Borsha, and women's development were screened.

The theme of this year’s International Women’s Day is “Women in leadership, achieving an equal future in Covid-19 world”.