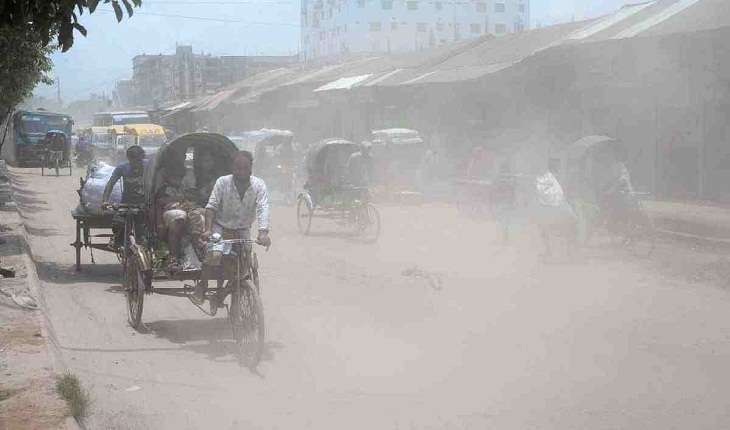 When the AQI value is more than 300, people are advised to avoid all outdoor exertion. India’s Delhi, Kolkata, and Mumbai have occupied the next three positions in the list with scores of191,179 and173 respectively.

The poor air quality of Dhaka, one of the most polluted cities in the world, has become a cause of concern for its resident as there is a correlation between the severity of Covid-19 infections and long-term exposure to air pollutants.

The AQI, an index for reporting the daily air quality, informs people how clean or polluted the air of a certain city is and what associated health effects might be a concern for them.

In Bangladesh, the AQI is based on five criteria pollutants - Particulate Matter (PM10 and PM2.5), NO2, CO, SO2, and Ozone.

Bangladesh topped the list of the world’s most polluted countries in 2019 for PM2.5 exposure, according to an IQAir AirVisual report.

The 2019 World Air Quality Report is based on data from the world’s largest centralized platform for real-time air quality data, combining efforts from thousands of initiatives run by citizens, communities, companies, non-profit organizations, and governments.

Air pollution consistently ranks among the top risk factors for death and disability worldwide. Breathing polluted air has long been recognized as increasing a person’s chances of developing heart disease, chronic respiratory diseases, lung infections, and cancer, according to the report.

Over 80 percent living in urban areas which monitor air pollution are exposed to air quality levels that exceed WHO guideline limits, with low- and middle-income countries most at risk, WHO estimated.

The World Health Organization (WHO) has also recently cautioned that the cities which have a higher level of air pollution should reinforce their preparedness against the deadly corona pandemic.

They also said the use of masks by all must be ensured by enforcing the law and motivating people as it is the most effective way to protect oneself from pollution and Covid-19.