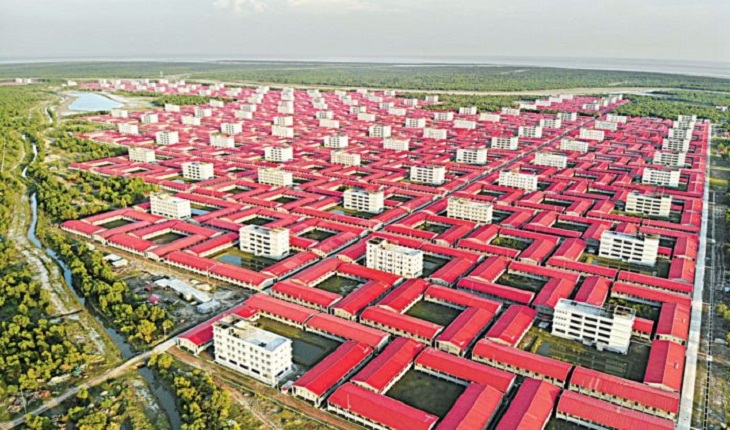 Foreign Minister Dr AK Abdul Momen on Tuesday trashed Al Jazeera’s latest report on Bhasan Char saying it is based on false information and part of its "vindictive approach" towards Muslim majority countries. "They're doing it from day one. Their aim is to confuse people with false information," he told UNB.

The Foreign Minister said it is Al Jazeera's "vindictive approach" towards any Muslim government, especially against the countries which are doing well.

The Qatar-based media reported that aid agencies warned that with the cyclone season fast approaching, a group of Rohingya refugees on Bhashan Char could be stranded and face food shortages when severe storms strike.

The Foreign Minister said some people were interviewed in the report and their faces were covered.

"It's their job to run false news. So, nothing to say about it," said the Foreign Minister.

He said they will hand over a 10-page report based on their observation and they have already submitted a two-page synopsis.

An 18-member UN delegation visited Bhasan Char in March to take a first-hand view of the housing facility for 100,000 Rohingyas.

In their two-page synopsis, the team pointed out three points – education for Rohingya children, increasing height of the embankments and better communication system.

Dr Momen said Bangladesh has no problem in providing education to Rohingyas but it has to be in Myanmar language.

“Rohingyas will have to go back to Myanmar. So, education in Myanmar curriculum will help Rohingyas integrate in their society easily once they return to home,” he said.

Regarding further increasing the height of the embankments, Dr Momen said they will certainly do it for their own needs.

On communication, the Foreign Minister said they can go to Bhasan Char through Sandwip as it will take 30 minutes if they follow that route. “There’ll be no problem regarding communication with Bhasan Char.” He said Bhasan Char is one of the 75 islands in Bangladesh and it is 10 times bigger than St Martin’s Island.

Responding to a question on diplomats’ visit, Dr Momen said they expressed satisfaction seeing the arrangement there with solid structures. “They’ve appreciated the arrangement very much. They liked it.”

“I had a discussion with two diplomats. They have liked Bhasan Char,” said the Foreign Minister.

On April 3, the Rohingyas, now living in Bhasan Char, interacted with the foreign diplomats and expressed their willingness to return to their homeland in Myanmar.

They conveyed their "high satisfaction" over the existing facilities in Bhasan Char, which they considered safe, secured crime-free compared to the congested camps in Cox’s Bazar.

The Rohingyas profusely thanked Prime Minister Sheikh Hasina and the Government of Bangladesh for the exemplary humanitarian support that has been extended to the Rohingyas since the mass exodus.

“I want my children to grow with their own national identity in their own country,” a Rohingya representative was quoted as conveying to the diplomats who visited Bhasan Char.

Some Rohingyas underscored the need to expand learning facilities for children and provide them opportunities for farming and fishing which would help in keeping them active.

The Ministry of Foreign Affairs organised the day-long trip to Bhasan Char for the Heads of Missions of ten Embassies/delegation - Turkey, EU, USA, UK, France, Germany, Japan, Australia, Canada and the Netherlands.

The Rohingya relocation to Bhasan Char, which started from December 4 last year, is in alignment with the GOB’s overall efforts towards repatriation.

Meanwhile, Bangladesh will demand 10 percent of the fund that the humanitarian agencies raise in the name of Bangladesh and Rohingyas if they do not provide services to 100,000 Rohingyas to be shifted to Bhasan Char gradually.

“Yes, they’ll have to pay because the fund is coming for Rohingyas. We’ll demand 10 percent of the fund if they don’t want to provide services to Rohingyas in Bhasan Char,” he told UNB in an interview at his residence recently.

Bangladesh is hosting over 1.1 million Rohingyas in Cox’s Bazar district and the government has a plan to shift 100000 Rohingyas to Bhasan Char gradually which has already started.

The Foreign Minister said it should not be the headache of the humanitarian agencies where Rohingyas are living.

“It’s not a matter whether Rohingyas are living in Kutupalong, Cox’s Bazar, Barishal or in Bhasan Char. That shouldn’t be their headache. Their headache should be providing services to Rohingyas. They’re obligated to give them services wherever they stay,” Dr Momen said.

If the humanitarian agencies do not provide services to Rohingyas, Member States will not give funds which will put them in hardship, he said.

The Foreign Minister said they do not know how the UNHCR and other agencies spend the money though they raise funds in the name of Rohingyas and host communities.