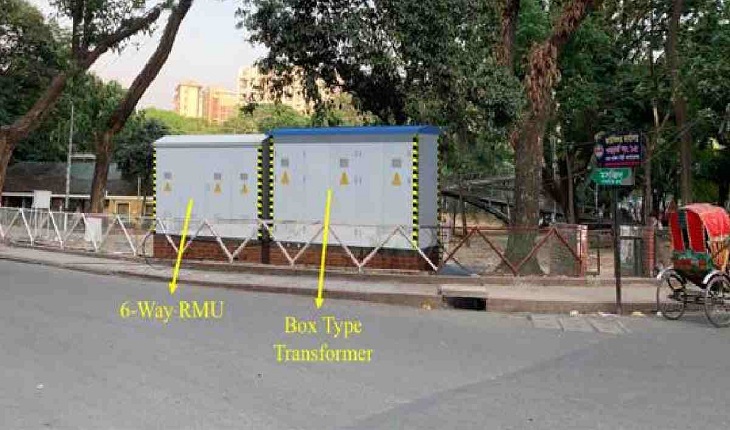 Under the project, 190 kms of overhead electricity cables, an eyesore in the city, will be taken underground, DPDC officials said.

Of these, about 115 kms are of 11 kV overhead lines, and 75 kms are 0.4 kV lines, they said adding that all kinds of overhead electric cables will go underground and no cable will remain visible in a particular part of Dhanmondi area that includes Satmasjid Road, Mirpur Road, City College and Greenherald School area.

DPDC officials said the project was supposed to kick off in January last year. But the Chinese engineers who were responsible for designing the works got stuck in their hometown Wuhan following the outbreak of Covid-19 pandemic.

But they later returned to Dhaka and got engaged in the project after the improvement in the coronavirus situation both in China and Bangladesh.

The DPDC undertook a Power Distribution System upgrading project to improve its network and system in its command area in Dhaka city and signed a contract with the Chinese contractor TBEA in September in 2019  to implement the China-funded Tk 20,500 crore mega project.

Under the project, 40 substations will be set up in the city while overhead cables of Hatirjheel Lake and Dhanmondi residential areas will be laid underground over the next five years.

Taking overhead cables underground from Jahangir gate in Cantonment to Motijheel is also included in DPDC’s other similar project.

Officials said most of the materials, equipment and system were brought to the country for the Dhanmondi pilot project and everything was ready to start the work.

Bikash Dewan said once the project is implemented, it will play a vital role in improving the power distribution system and substantially check the unexpected interruption in power supply.

There are widespread allegations from the consumers that interruptions take place frequently in many areas in the city.

DPDC officials admitted that it happens due to a weakness in the distribution system despite the fact that there is no shortage in electricity supply.

Under the power distribution system upgrading project, the capacity of a number of substations will also be improved, they added.

Before starting the fieldwork, DPDC has invited both the city corporations, internet service providers (ISPs) and cable TV operators to join the project for its proper implementation through better coordination.

But the power distribution company’s call seems to have gone unheeded as it has not yet received any response from other authorities.

“So far, we’ve not received any response to our appeal to the city corporations and others,” said Bikash Dewan, the Managing Director of DPDC.

But I heard the city corporations and ISPs are taking up separate projects to take their cable underground, he added.

“It not only tarnishes the beauty of the city, but often becomes a cause of threat for public safety,” said Sajjadur Rahman, a city dweller.