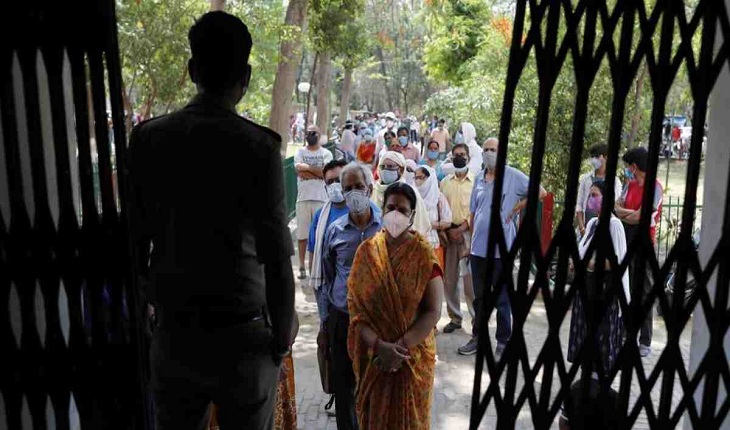 A confirmed case of Indian Coronavirus strain has been detected in Bangladesh, says the Institute of Epidemiology, Disease Control and Research(IEDCR).

"The Indian variant of Coronavirus was detected in a sample test at Evercare Hospital in Dhaka. It has been published on Global Initiative on Sharing All Influenza Data(GSID)," said chief scientific officer of IEDCR ASM Alamgir.

Directorate General of Health Services (DGHS) DG Dr ABM Khurshid Alam also told the media that the Indian variant of Coronavirus has been found in Bangladesh.

The infected patients returned from India. They had been there for treatment, and now they’re staying in Jeshore,”  he added.

Besides, the DGHS said 60 of India returnees, who are now there in institutional quarantine, came here after getting infected there. But it is not sure yet whether they were infected with the Indian variant, it said.

Earlier, on May 3, the DGHS said the government would be confirmed within a few days whether the highly contagious Indian variant of coronavirus has already reached Bangladesh as an investigation was on in this regard.

Speaking at a virtual press briefing, DGHS spokesperson Dr Nazmul Islam, said, "We may be able to say it in a few days whether the Indian strain of Covid-19 has come to Bangladesh or not." He said the samples of those who tested positive for coronavirus after entering Bangladesh from India are being collected. “These samples are being sent for genome sequencing…we’ll share it with you immediately after receiving the report.”

India is experiencing a horrific Covid situation as its crematoriums and burial grounds are being overwhelmed by the devastating new surge of infections tearing through the populous country with terrifying speed, depleting the supply of life-saving oxygen to critical levels and leaving patients to die while waiting in line to see doctors, reports AP from New Delhi.

India recorded over 4 lakh new Covid-19 cases in the last 24 hours ending 8 am Saturday, taking the country’s total caseload to over 2.18 crore. Out of these, over 37 lakh cases are currently active while over 1.79 crore people have recovered.

With 4,187 new deaths, the toll now stands at over 2.38 lakh. At least 14 states are reporting cases in five figures.

Maharashtra reported about 54,000 cases, Karnataka had nearly 49,000, while Kerala had over 38,000. On April 26, Bangladesh closed its border with India for any kind of movement except that of cargoes for the next 14 day to prevent the spread of the deadly Coronavirus.

The Indian variant of Covid-19 viruses mutate all the time, producing different versions of themselves. Most of these mutations are insignificant - and some may even make the virus less dangerous - but others can make it more contagious and harder to vaccinate against.

The original India variant - officially known as B.1.617 - was first detected in October, reports the  BBC. That version has now been re-characterised as three different subtypes, all with slightly different genetic mutations.

India has said a new variant of the coronavirus first discovered there in March may be linked to a deadly second wave, according to another BBC report. Samples containing the "double mutant"- or B.1.617 variant - have been found in several states with high case numbers.

An official at the National Centre for Disease Control said, however, that they had still been unable to fully establish a correlation. A double mutant is when two mutations come together in the same virus.