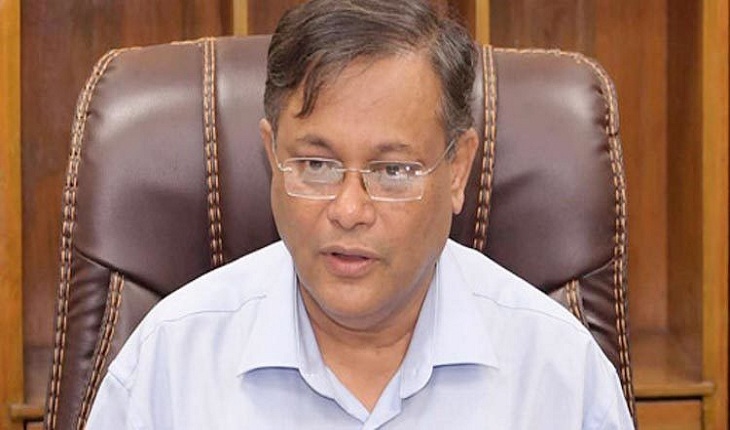 Information and Broadcasting Minister and Joint General Secretary of Awami League (AL) Dr. Hasan Mahmud today said it is a big question whether BNP chief Begum Khaleda Zia needs to be taken abroad for medical treatment at all. “It is not clear why the BNP wants to take her abroad, because Begum Khaleda Zia is getting the highest medical facilities in the country,” he added.

Dr Hasan said this while speaking as the chief guest at a function marking World Red Cross and Red Crescent Day-2021 at Bangabandhu Hall of Chattogramg Press Club here this noon.

Terming Begum Khaleda Zia a two-term Prime Minister and a prominent politician in the country and a respected person to him, Dr Hasan said that she is now ill and is being treated in hospital. He prayed almighty to her early recovery.

Dr Hasan said that Bangabandhu’s daughter Prime Minister Sheikh Hasina has given instructions for the highest medical care of Begum Khaleda Zia. “She is now getting the highest medical treatment in Bangladesh. But we can see that the BNP and her family are repeatedly asking to take her abroad,” he added.

“BNP is not worried about the health of country’s people rather all their thoughts are now focused on Begum Khaleda Zia’s health. BNP’s politics is now limited to whether Begum Khaleda Zia has a temperature or not, how many degrees, whether she has knee pain or not,” Dr Hasan said.

Requesting the BNP, the Information Minister said, “Do not let your thoughts be immersed only in the health of Begum Khaleda Zia and stand beside the people.”

Dr Hasan mentioned that Bangladesh Awami League is providing various health protection items and food aid to the people. BNP should also come to the field and distribute food items to the people, he said.

“If we make any mistake then you have the right to criticize,” Dr Hasan said. “There are three types of experts in Bangladesh, one is the real expert, the other is the ignorant expert for a special reason and some experts are experts in all matters,” he added.

The Broadcasting Minister said that those who are experts in all matters and those who are ignorant experts for special reasons, had expressed their views at the beginning of the Corona epidemic that thousands of people in Bangladesh will be starving and corpses will be lying on the streets.

But due to the infinite mercy of God and the dynamic leadership of Bangabandhu’s daughter Prime Minister Sheikh Hasina not a single person died without food in the last 14 months, he added.

He said that the situation today is that more than 80 percent of 12,000 beds for Corona are empty and many ICU beds are also empty. “The dynamic steps of Prime Minister have been successfully in controlling Corona. But critics’ criticism doesn’t stop there,” he said.

Dr. Hasan Mahmud said that people have become very self-centered as they only think about themselves, they do not think about others. He said the members of the Red Crescent are working for humanity and they will be a role model in society. He said that Bangladesh is a country of disasters and the members of the Red Crescent stand by the people and serve them in all disasters.

Millions of people have benefited from the Red Crescent Society in the last fifty years since independence. The way the members of the Red Crescent society are working to serve humanity in the field of vaccination and the distribution of relief in the Corona epidemic, is certainly commendable, he added.