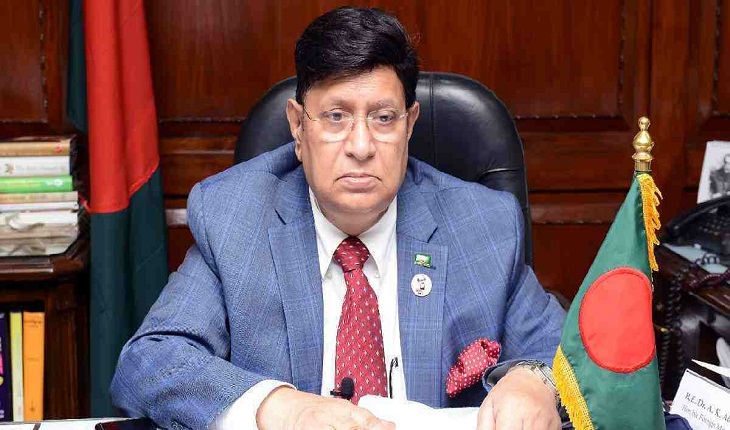 Foreign Minister Dr. AK Abdul Momen on Tuesday said Bangladesh maintained a non-aligned and balanced foreign policy and it will decide what to do following that principle.

"We’re an independent and sovereign State. We decide our foreign policy. But yes, any country can uphold its position," he told reporters adding that they see with respect what others say.

The Foreign Minister made the remarks when his comments sought on Chinese Ambassador to Bangladesh Li Jiming's remarks on "Quad" and Bangladesh.

"Naturally, he (Ambassador) represents a country. They can say what they want. Maybe they don't want it (Bangladesh's joining Quad)," Dr. Momen said, adding that no one from the organization that was mentioned did approach Bangladesh.  “The comment has been an advanced one,” said the Foreign Minister.

Dr. Momen said many people said many things in the past but Bangladesh is guided by its principled position.

He said they will decide following the foreign policy principles considering the interest of the people and the country. "We’ll continue to do it (maintaining non-aligned and balanced foreign policy)." "What he (Ambassador) said it's fine. We’ve nothing to say about it," Dr. Momen added.

The envoy said obviously it will not be a good idea for Bangladesh to participate in this small club of four countries because it will substantially damage the bilateral relationship between the two countries.

“So, we don’t like to see any form of participation by Bangladesh to this small group of countries,” said Ambassador Li. He termed “Quad” a military alliance aiming against China's resurgence and its relationship with neighboring countries.

The US, India, Japan, and Australia are part of an informal strategic alliance - the Quadrilateral Security Dialogue, or Quad as it is known.