'Day dedicating bench after Bangabandhu at UN headquarters is historic' 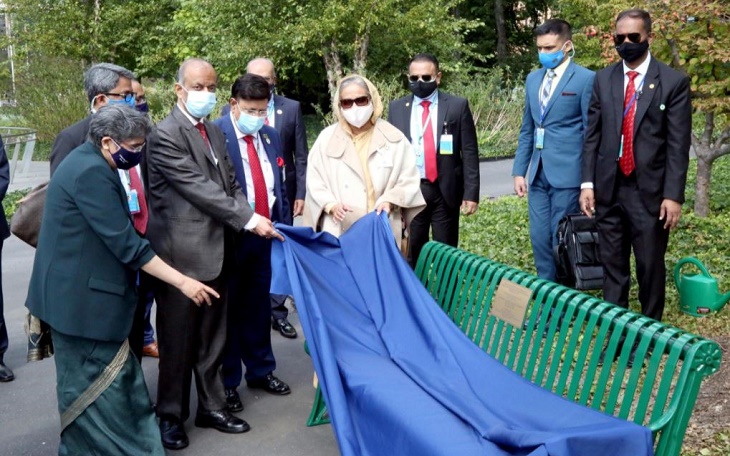 Prime Minister Sheikh Hasina described the day (September 20) as a historical one as a bench was dedicated along with planting a sapling of the tree at the United Nations Headquarters in honour of Bangabandhu marking his birth centenary.

"This is a special and historic day as a bench was dedicated and a sapling of the tree was planted after the name of the great leader in the month of September in such beautiful place (UN Headquarters), she said.

While opening the bench inscribed with remarks of Bangabandhuand planting a sapling of Honey Locust tree at the UN Gardens in the North Lawn of the UN Headquarters, the premier said that today is a historic one as the UN recognised Bangladesh as an independent state on September 17 after the Liberation War and Father of the Nation Bangabandhu Sheikh Mujibur Rahman gave his speech in Bangla in the UN on September 25.

She greeted all concerned including the foreign ministry and Bangladesh permanent representative to the UN for taking the initiative.

Sheikh Hasina also paid rich tribute to the memories of the martyrs of the UN peacekeeping missions by placing floral wreaths.

The prime minister said that the Father of the Nation dedicated her entire life to establish peace as peace is a prerequisite for a country's development.

"We can realise that a peaceful environment is a must for the development of a nation," she added.

The premier said that the tree which was planted today dedicating Bangabandhu will sustain for more than a hundred years and it will carry the message of peace.

Referring to the policy of Bangabandhu "Friendship to all, malice to none," she said that the Father of Nation always gave priority to establishing peace in the globe.