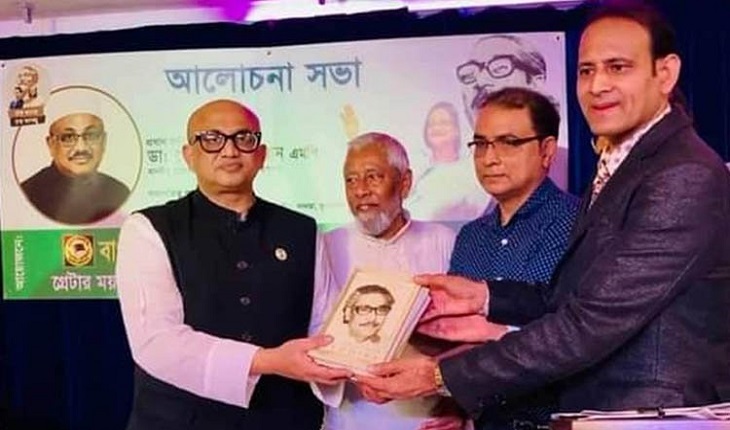 State Minister for Information and Broadcasting Dr. Md. Murad Hassan has said the Awami League (AL) government's relentless work for the last twelve years turned the country into a middle income one.

"All the country’s progresses, starting from development of life and livelihood to digitalization, have been possible by implementing uplift programmes of the present government led by Prime Minister Sheikh Hasina," he said.

The state minister made this comment while addressing a public gathering here organised by Quebec city unit of Bangladesh AL on Sunday, an official release received here today.

He said there is no history of development and achievement of Bangladesh other than Bangabandhu and his daughter incumbent Prime Minister Sheikh Hasina.

Talking about Bangabandhu's political philosophy, Dr Murad said: "We have to know Bangabandhu first for knowing Bangladesh completely as Liberation War, Bangabandhu and Bangladesh are sewed in a single thread".

Bangabandhu's political philosophy is acknowledged in all over the world as he not only thought about Bangladesh, but also about the whole world, he said.

The state minister urged all to take initiative to let know the young generation about Bangabandhu.

He said the killers had assassinated the great leader Bangabandhu Sheikh Mujibur Rahman on August 15 in 1975, but they never killed his philosophy, morals and ideology.

After the assassination of Bangabandhu, he said the anti-liberation forces tried to take the country far away from the ideology of the Father of the Nation as they didn't do any work for the development of the country.

The state minister added Zia, Ershad and Khaleda had always tried to undermine Bangabandhu and his family members.

"But they did not become successful as the people of the country did not allow them to do it," he told the function.

He said Father of the Nation Bangabandhu Sheikh Mujibur Rahman is the greatest Bangalee of all time.

He said, "All of us must have to know about the history of struggle and sacrifices of his whole life as all elements of becoming an ideal citizen remains in his [Bangabandhu's] philosophy of life, ethics, ideology, works and leadership quality."

Referring to Bangabandhu's far-reaching views, Dr Murad Hassan said Bangabandhu had declared the programmes to decorate the country and his daughter Prime Minister Sheikh Hasina has taken the country to a new height.

"Bangladesh is moving ahead under the leadership of Prime Minister Sheikh Hasina following the ideology of Bangabandhu and the Liberation War," he
said.

A number of development works including Padma Bridge, Karnaphuli tunnel, metro-rail, nuclear power station and Matarbari deep sea ports are progressing under the apt leadership of the Prime Minister.