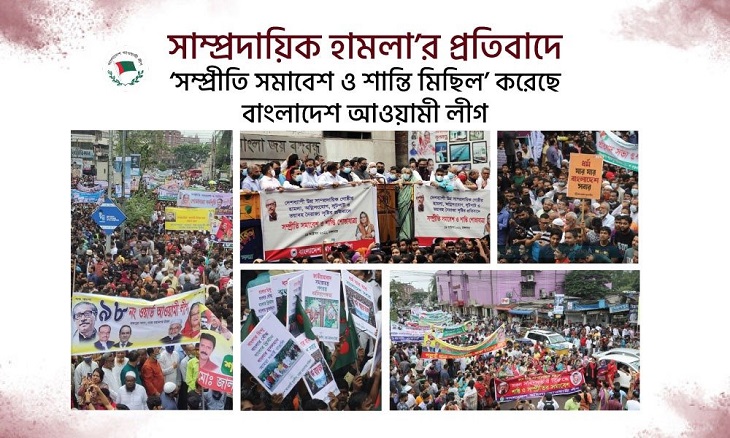 The Awami League today staged a rally titled 'Sampriti Samabesh' (rally for harmony) and brought out peace procession in the capital Dhaka in protest against the recent communal attacks in several areas of the country.

The ruling party arranged the rally in front of its Bangabandhu Avenue central office with a vow to resisting communal terrorist acts in the country.

As part of countrywide programme, AL arranged the rally and brought out peace procession centrally in the capital. AL and its associate bodies arranged identical programme at district, city and upazila levels.

Since the morning, AL and its associate and likeminded bodies assembled at the Bangabandhu Avenue from different parts of the capital by holding procession and chanting slogans against communalism.

He urged the leaders and workers of the party and associate bodies as well as the conscious citizens of the country to make united resistance against the communalism.

"Today communal forces are carrying out attacks on Hindu community in our country, it could make problem of our Muslim brothers in India. We will have to make united resistance against communal elements," he said.

After the rally, peace procession was brought out from Bangabandhu Avenue and it ended at Central Shaheed Minar after marching different city streets.

After the AL programme, its associate bodies inducing Awami Jubo League staged separate programme in protest against the communal attacks on Hindu community.