Zila Parishad chairmen, members not to hold posts after tenure 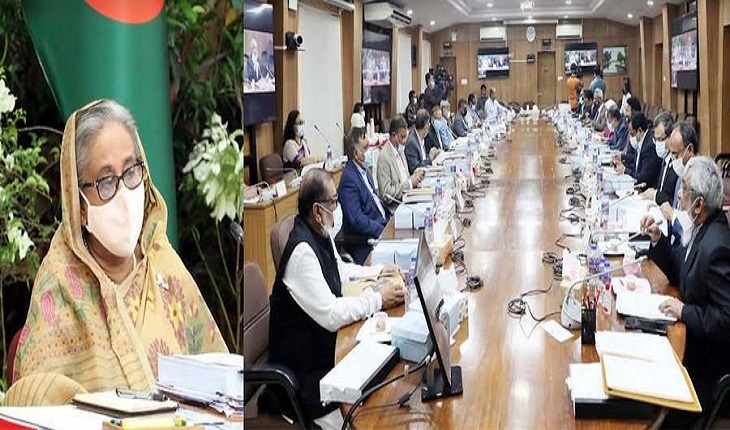 The Cabinet today approved a draft bill with a provision barring the Zila Parishad chairmen and members from holding their positions after completion of their 5-year tenures on any excuse.

The draft of Zila Parishad (Amendment) Act, 2021 was cleared in the regular cabinet meeting held with Prime Minister Sheikh Hasina in the chair.

The premier joined the meeting virtually from her official residence Ganabhaban, while others remained at Secretariat.

“Zila Parishad representatives will have to leave the posts after the expiration of their tenure. The government would appoint administrator to run the local body until formation of the next council (Parishad),” said Cabinet Secretary Khandker Anwarul Islam while briefing reporters after the meeting.

He said the proposed law has been placed, bringing similar change as was done in the Local Government (Municipality) (Amended) Act 2021, which was also recently approved in the Cabinet as the representatives of some local bodies hang on to their posts even for 14-15 years on different excuses, particularly legal complications.

As per the draft law, Upazila Nirbahi Officers (UNOs) would be observing members of Zila Parishad, he said.

Besides, the Cabinet in principle approved the draft of Bangladesh Film Certification Act, 2021 bringing some minor changes to the existing law.

Now the films are given approval as per the Censorship of Films (Amendment) Act 2006. The proposed law was placed, bringing some minor changes to the existing law and changing its name by replacing the word “censorship” by “certification”, said the Cabinet Secretary.

“If any person screens any film without certification or any certified film without symbol, s/he will face the maximum punishment of five-year jail, Taka 5 lakh fine or both for it as per the proposed law,” he said.

If anyone tampers the contents of a film after having certification, the maximum punishment would be two-year jail or Taka 2 lakh fine, he added.

The Cabinet endorsed the annual report on the activities of ministries and divisions in the 2020-21 fiscal year.

Besides, the total inflow of remittance was US$ 24.78 billion and 271,954 Bangladeshi workers were employed abroad amid the Covid-19 pandemic in the last fiscal year, as per the report.

Noting that 87 percent progress attained in the works of Padma Bridge, the Cabinet Secretary said, “We hope that the bridge can be opened for traffic on June 30 next or a date closed to it.”

He said a total of 54,434 houses were constructed in the 2020-21 fiscal year and the landless and homeless families were rehabilitated in the houses.

In the last fiscal year, the disbursement against the social safety net under different ministries and divisions was Taka 95,774 crore which is 16.83 percent of the national budget and 3.01 percent of the country’s GDP and the revenue collection was Taka 328, 582 crore with 23.57 percent growth .

The Cabinet approved the draft speech of President Md Abdul Hamid to be delivered in the 15th session of the 11th Parliament on November 24 next on the occasion of 50 years of the country’s independence.

The President will deliver the speech on the opening day of the two-day special discussion in the House, marking the golden jubilee of the Independence.

The Cabinet approved a proposal to set up a permanent representative mission in the Organization of Islamic Cooperation (OIC).

The Cabinet was informed about the visit of the Food Minister to Turkish capital Istanbul to join the 8th OIC Ministerial Conference on Food Security and Agricultural Development on October 25-27 last.

Polls in six upazila of Kushtia on Sunday