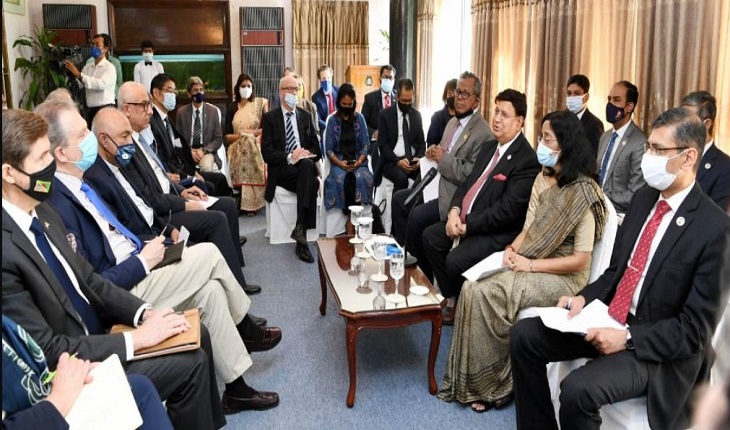 He informed the diplomats that Khalea Zia is free to take treatment anywhere in the country and also allowed to bring any doctors from abroad.

“(I told diplomats) The government has nothing against (Khaleda's treatment), (but) if she (Khaleda) wants to go abroad for treatment in that case she has to do it through the legal process, but she can have treatment anywhere in the country,” Dr Momen told reporters after briefing the diplomats at the state guesthouse Padma in the capital.

The foreign minister said Khaleda Zia is a prisoner and the government wants to uphold the rule of law in Bangladesh.

The foreign minister told the diplomats that the government is committed to hold free, fair and transparent elections in Bangladesh.

About the ongoing UP elections, the foreign minister said the polls are being held freely though some violence were taken place due to over-enthusiasm of some people.

"(But) we don't want to see any single fatality (during the polls)," he added.

The foreign minister briefed the diplomats about the upcoming World Peace Conference to be held in Dhaka on December 4 to 5 where representatives of many countries are expected to join.

He also briefed the diplomats about relocation of Rohingyas to Bhashan Char and Bangladesh's agreement with the UNHCR in this regard.

Dr Momen said the government has already relocated 19,000 Rohingyas to Bhashan Char and the government will not give pressure to any of the displaced people to relocate as it is the Rohingyas choice to choose better living there.

During the meeting, Dr Momen urged the Saudi enterprise to invest in various potential sectors in Bangladesh.

In reply, the Saudi minister informed that at least 30 Saudi private companies are interested to invest in Bangladesh.

The foreign minister also thanked the Saudi government to support Bangladesh in the Rohingya issue.

Momen for addressing needs of differently-abled